Rising artist, songwriter, and DJ MAAD is an artist you want to familiarize yourself with now! Her R&B/soulful lyrics in her debut EP, Le Funk captivated us with its retro and contemporary sound. We sat down with the young artist to discuss her EP, her latest project, and what we can expect to see from her in the future.

Tell us about yourself. How did you get into the music scene?

My name is MAAD. I got into the music scene mainly by just putting demos and lyrics together while working with a couple of different producers. I’m a singer, songwriter, DJ, model, a little bit of this, a little bit of that (laughs).

Do you mind sharing the inspiration behind your new single, “BAAD”?

The inspiration behind my new single, “BAAD” was really just my love for the ‘90s. I was highly influenced by ‘90s culture, cords, and the music during that time. I think that reads a lot in the music that I do release. I hope that people feel that when they listen to it because that’s definitely a strong inspiration of mine.

Tell us about your EP, Le Funk.

Le Funk was an EP that I released. It has seven songs. I really just love the nostalgic times of studio 540 and the ‘70s. That project was very much based around that. There are lots of instrumentation and live instruments that I worked with in this production. I’m very happy with how it turned out. That’s actually one of two projects that I have. The other is Technicolor.

Right now, you can expect the release of new music. I’ve put out three to four records in the past couple of months. I’m gearing up to release a new single. I just put out this record “So Into,” it was the introduction to the single “BAAD.” It was an SWV cover.

There are a lot of new shows and I am gearing up to perform at LA Pride with an artist named MNEK. I just want to continue to release new music, visuals, djing, and just keep putting my foot on people’s neck (laughs). 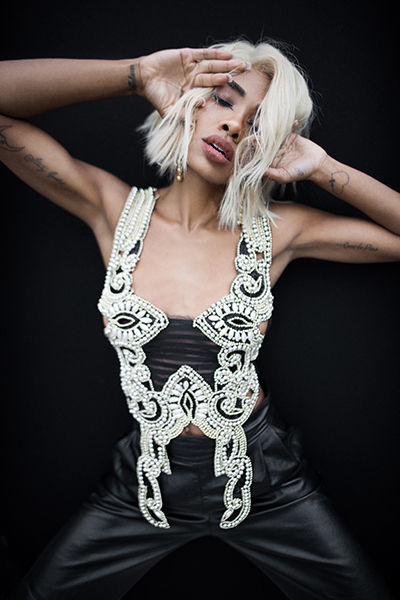