So You Want to Buy a Hotel? The Inclusive Empowerment of NABHOOD

When I arrive at The Gabriel Miami, there are already close to a hundred people mingling within the dim-lit CVLTVRA Restaurant, the steady tide of voices rising and falling, reacting to the volume of those around. In the center of the room, the bar is guarded by two pillars, covered in downward rectangles – each geometric shape a different shade of green – as if a cubist were depicting an afternoon jungle rain. The dark foliage, bamboo-esque floor, and beginning to set sun further add to the rustic atmosphere, something akin to tropical sophistication.

Glancing around, I feel slightly underdressed in just a button-up and pair of slacks and give myself a chiding for choosing my comfortable shoes, a pair of scuffed-up Clarks, over something more fitting. But what is done is done, and so my night begins. The bar is crowded, as you’d expect at a networking event. I avoid the area entirely and walk over to a less crowded dressed in purple mini bar – Crown Royal is sponsoring the event – grab a drink, and begin asking questions to those approachable types, those who seem willing to answer, “What drew you to NABHOOD,” always being the first.

Almost twenty years ago, Andy Ingraham, along with Solomon Herbert, founded the National Association of Black Hotel Owners, Operators & Developers in order, “…to help develop and increase the number of African American owned hotels.” Simply put, it was obvious there weren’t enough minorities in executive positions – likewise when it came to vendors who were supplying hotels – and something had to be done about it. Since NABHOOD’s arrival, the progress has been astonishingly successful. In 1997, the year NABHOOD became an idea, there wasn’t one major franchised hotel owned by an African American in the United States. Today, in Florida alone, there are almost two dozen. For a clearer understanding of the total number within the United States, just one look at NABHOOD’s directory of African American owned hotels, exhibits entirely the efficacy of NABHOOD’s mission.

And as explained by the organization, “The shift has just begun and will continue to grow with our hotel partners who have a vision for diversity and inclusiveness in this great industry.” Yet there is still work which needs to be done, relating to the disparity in numbers. For instance, fifteen states in the USA still do not have an African American owned hotel, including the destination state of Hawaii.

One of the ways NABHOOD is combating these issues of inequality within the hospitality industry is by providing scholarships, mentorship, and networking opportunities for minority college students who are pursuing hospitality as a career or aspiring to own their own hotels. At the reception, I asked a few of the selected students what drew them to hospitality in comparison to other professional fields. One of the more comical answers compared a hotel owner with that of an NBA star. “Who do you think’s making more money? The hotel owner. They’re the ones really living like rock stars.” But it was Jordan Johnson, a junior at Johnson & Wales University, whose answer most sat with me. “I was raised in hospitality. My mother and sisters all worked in hotels. So it’s always been part of my life. I want to own my own hotel for my future family, to provide for and build a legacy for those I care about.”

All throughout the night, I found myself meeting a wide range of individuals, and not everyone came from a hospitality background. For instance, at one point I sat down with a group of women – their occupations: Wall Street lawyer, clinical psychologist, architect, but who were nonetheless interested in what they could bring to and garner from the event. Yet time and time again, the heart behind Jordan’s answer kept on popping up. The owners of the South Beach Lady cruise ship, Denese and Horace Inniss, told me how they eventually want their daughters to take over the business, “At least when they’re ready,” as Denese put it. And after a conversation with Monika Moss-Gransberry, president of Walnut Ventures LLC, looking down at her business card, I read, “Let us make generational wealth happen for you.”

The theme of this year’s event, held at Marriot Biscayne Bay Hotel, was “Ownership – The New Paradigm.” During the following few days, I sat in on a good number of the conference sessions the investment summit and trade show had to offer and learned about who these people were, the current African American owners who have become examples for the community and culture. 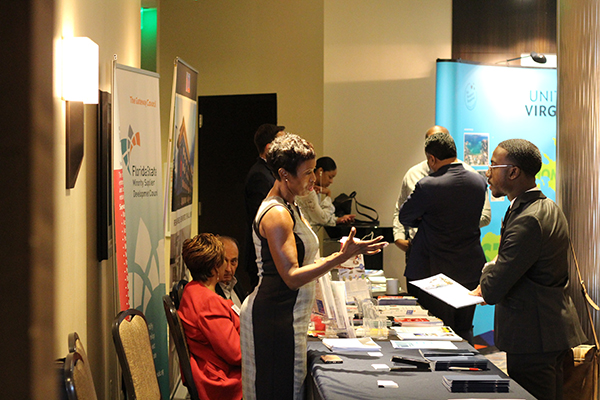 I listened to R. Donahue Peebles – named by Forbes as one of the ten most wealthy African Americans in the country, with an estimated net worth of $700 million dollars, not even mentioning a slew of other accolades – as he described the importance of NABHOOD and how, in 1996, he rebuilt The Royal Palm Resort, the first major African American hotel to be owned and developed in the United States. To give you an idea of Peebles’ significance, NBA hall of famer Isaiah Thomas opened for him. 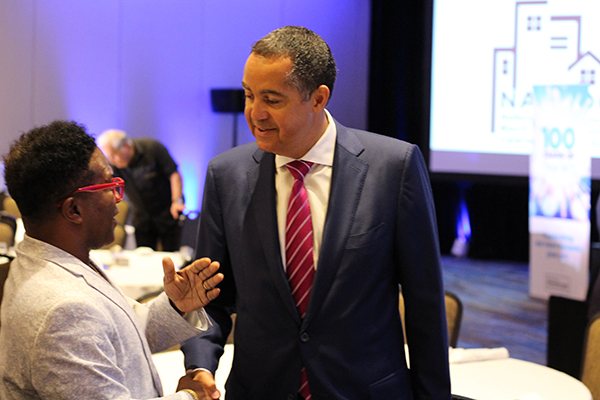 Later on, during the session, “Minority Vendors – What are the opportunities and how to successfully market goods and services to the industry,” – a long name yes, but perfectly descriptive – I was introduced to the National Minority Supplier Development Council. It’s president and CEO Adrienne Trimble, explained how the organization is helping minority-owned businesses enter and navigate through the hospitality industry, giving them a fair shake, so to speak, in an extremely competitive market. Then came the investment opportunities in Hallandale, Tuscaloosa, and the US Virgin Islands, the latter which was presented by Shanell Petersen, the Managing Director, Marketing and 2040 Vision of the U.S.V.I. Economic Development Authority – which, considering my student loans, is something I’ll have to hold off on for a while. Regarding the best option in whether to buy, build, sell, or hold a hotel, in the “Buying and Selling Hotels In Today’s Market,” session, I learned the about the economic climate of the hotel industry – it’s good, but maybe too good? – which was incredibly interesting, watching and listening to experts in their field, such as Rich Lillis the Executive Managing Director of Colliers International’s Hotels USA Group. Later on in the evening, he explained to me why NABHOOD was important to him.

“It has been such a pleasure seeing this vibrant organization continue to flourish and make a positive impact on the lodging industry. For around 15 years, we have been actively involved with NABHOOD and have seen firsthand the amount of opportunities that have been created for African-American hotel owners, developers, operators and overall community.”

There were dozens of other sessions, round tables, and meet and greet corporate events. However, not everything involved the seriousness of subjects such as price projections, management advice, and franchising. Each luncheon consisted yes, of talks regarding the industry, but were lighter in nature, more so designed by NABHOOD to highlight – with anecdotes and jokes alike – the successful individuals paving the way, again, for future generations. 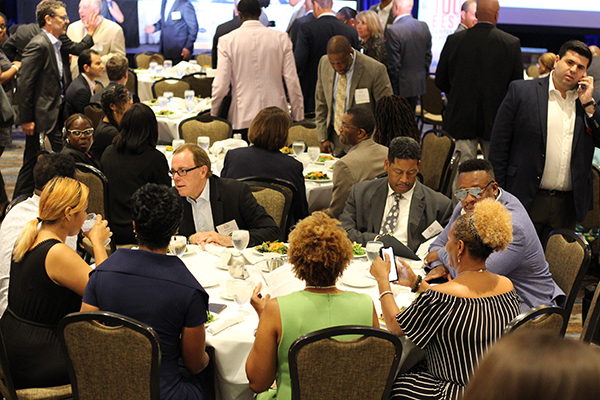 Every night featured a reception, usually accommodated by something festive, such as a steel drum player playing everything from classic croons to pop chart hits, and a full staff of Crown Royal representatives – the perfect opportunity to meet one the speakers or presenters in a more casual setting. And Friday was capped off with a lovely cruise on the aforementioned South Beach Lady. 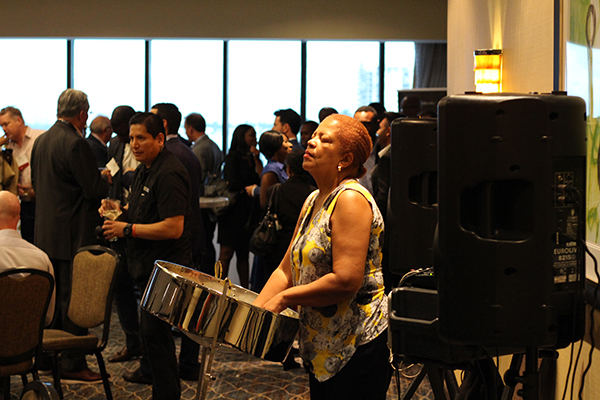 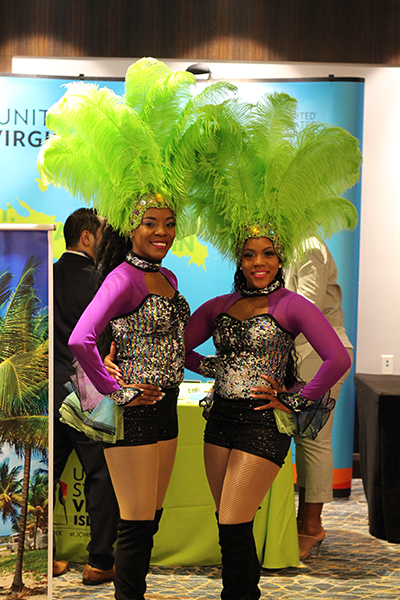 The whole of the event encompassed NABHOOD’s message resoundingly:

And I’m glad to have experienced and been a part of it.

Regardless of your occupation or place in life, if you have even an inkling of interest in hospitality or would simply like to rub shoulders, networking with the industry’s greats, we’ll let you know more information about next year’s summit. And make sure to check out the official NABHOOD website for other events NABHOOD has coming up.

For more on Andy Ingraham, order a copy of our 2019 May/June issue, for an in-depth interview of NABHOOD’s founder.

Featured Image obtained on the official Facebook of NABHOOD