The Harlem-based film is set to take part of the official selection at the festival in Miami, Florida on June 14th and at the San Fransisco Black Film Festival on Sunday, June 16th.

Written by Harlem native, Sha-Risse Smith and Piper Dellums, the film takes the audience on a journey through Kalani Johnson’s life (portrayed by Joi Starr), in pursuing her dreams to get into one of the most prestigious schools in the nation, Yale University. While chasing her dream, she must face the challenges life throws her way while living in Harlem.

With no one on her side but her college counselor, Mr. Rose (portrayed by Danny Glover), Kalani must push against the world in order to achieve greatness

In an official statement, Sha-Risse Smith said, “I wish I had a film like this when I was going to boarding school.”

Joi Starr shared, “I want people to watch this and say, if Kalani can do it, I can too.’ Kalani is the superhero on screen that I wish I was.”  She states, “I’m honored and grateful to have been chosen to play this incredible person.”

Strive received the Audience Award at the Harlem International Film Festival this year and actress, Joi Starr took home the award for Best Actress for her role in the film. 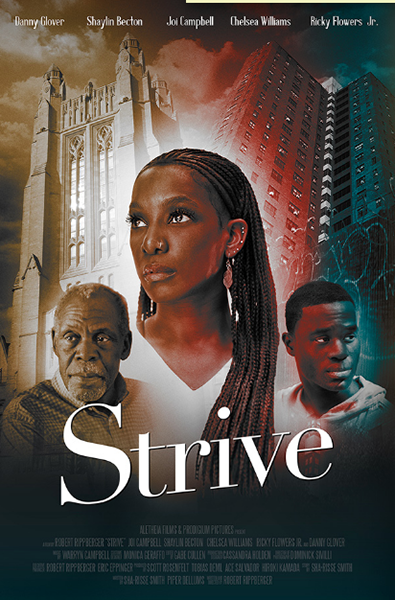