Tobie Windham on His Role in Disney’s First Interactive Sitcom, ‘Just Roll With It!’

Actor, Tobie Windham has a new project on the rise so naturally, we had to gain all the details! Windham will star in Disney’s very first live interactive sitcom titled, Just Roll With It!, a series that allows the audience a chance to vote on the outcome of certain scenes! We caught up with the actor to discuss his exciting new role and much more!

First off, what made you want to enter the world of entertainment and become an actor?

I’m interested in the human condition. I love the psychology of people, I’m a people watcher. I love what it’s like to dive into what makes move them and what makes them tick and expressing that through art. Whether it is on television or through a television performance, I love all of that. I wanted to make my mom laugh and then it morphed into doing it on a larger level and impact people and move the culture.

Tell us about your role on Disney’s first live interactive sitcom, Just Roll With It.

I play Byron Blatt and I am a DJ/radio personality. The show is a hybrid where it is half scripted and half improv. It’s interactive with a live audience. A horn will go off at any point in the show and my blended family has to act on what the audience votes on to happen to us (laughs). We just have to roll with it. It is a first of its kind. Rachel, my wife, has a daughter named Blair and we’re very much alike. We are full-speed, fun, and we’re pretty reckless while my son and Rachel are by the book and strict. It’s very dynamic and a lot of fun. The improv stuff we do can be super extreme but I think the audience really enjoys being a part of it and choosing our own adventure.

How would you say this role is different from any other role you’ve portrayed previously?

I have never done improv where there is a camera and they are capturing every moment. This is live, I have no clue what’s gonna happen and when its gonna happen. For an actor, we live moment to moment. The craft of acting is being able to make things look like they’re real. I think that is what the best actors do. They have this ability to rehearse and when they perform, they make it look like they’re doing it for the first time. With this show, I am actually doing it for the first time. If something is funny, it’s like we just created that in the moment! It’s a gift. The huge difference is that I’ve never done this. No one has ever seen anything like this before. This show is making television history.

I enjoy working with the actors on the show. My co-stars and I have a true chemistry. In improv, you have to have everybody’s back at all times. To do everything at one time is so difficult yet so free to live on stage, find comedy, and create these moments with one another. Building chemistry with these actors is super special.

When you’re not being a COOL Dad on television, what are you doing in your free time?

I spend a lot of time with my two-year-old daughter. She went from being a baby to being a full kid so I’m literally chasing her (laughs). She has a bunch of personality. My wife and I are creators so we’re constantly writing and producing. I enjoy basketball – I’m a Boston Celtics fan. I love hiking. I wouldn’t say that I can cook, but I say I can make food (laughs). If you have some stuff in the fridge, I can put together a gourmet meal. Don’t ask me to follow a recipe or create my own. I’m super instinctual so I’m constantly changing things up and making things, not cooking (laughs).

I have some projects in 2020 that I cannot talk about right now, but it’s going to be exciting. My production company is gearing up to shoot shorts. We have a feature that we’re about to do. I don’t want to mess up anything before it comes out, but 2020 is going to be nice! 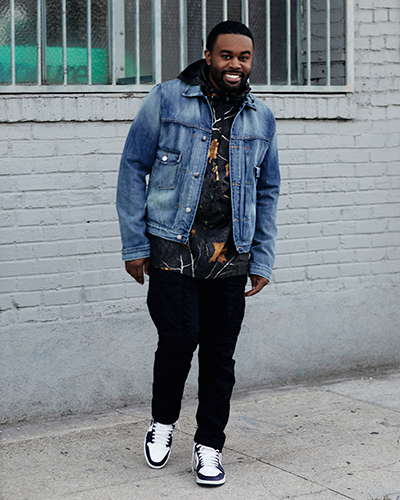 All images by Caleb Shane