With the odds stacked against her, Che’toia Walker determined not to allow her current situation, to be her future situation. From foster homes, spousal abuse, and being a young mother, she’s now the owner of a 2-million-dollar facility and became the first black female to own a cannabis cultivation facility in Massachusetts. What’s different about Che’toia is that she didn’t expect cannabis to be the wealth to break her family’s generational curse. However, she stayed the course and knew she would come out on top. Our conversation is so inspirational.

Tell us how you got started in the cannabis field.


That’s a very interesting question. So, my partners and I had actually been building businesses for a couple of years.  And as we watched the market, we were able to see how the cannabis industry was trending when it came to the east coast. We had, had our eyes on Massachusetts for some time.
So, we were there at the stages as they grew. As far as, developing their commission and getting things tightened up before they opened up to legally use, and recreational sales. And so, we’re like – “This is a perfect time to jump in. So, let’s go ahead and do it!”


We noticed that you’ve previously worked in the tech field, how did you transfer from IT to cannabis? Was it more of a smooth transition or was more required of you?
You did some good research. So, with what I did in IT; I did a lot with information security, information systems. I did a lot with program management, risk management, things of that nature. So as far as those skills, that skill set can translate anywhere, right? It’s been a smooth transition as far as me handling operations.

I know how to make things run. I know how to handle adverse situations. I’ve been known as a forward-thinking person, and I know how to manage people. So, it actually wasn’t a difficult transition at all. I’m able to take a lot of it on because the majority of my background is in the federal government. I’m able to take on a lot of structure, organization, and regulation of standards compliance. All the things that are very critical in the cannabis industry when it comes to operations.
So, you feel like your skills are being utilized from IT and they transition really easily into the cannabis industry?

I feel like in the beginning, being a woman of color in the industry was a little ostracizing. You go to these conventions and conferences, and you don’t see too many people who look like you. The few women who do look like you, that you’re able to rub elbows with, you end up having the same stories.

As soon as you get somewhere you come right to each other because there’s nobody else who looks like you. That’s how it was in the beginning. Though I feel like at this point as the industry grows, as the awareness of the lack of diversity in the industry grows, more women are feeling comfortable with stepping into it. And I’m in full support of it! I love being able to see, the different connections. In networking in general, being able to see more women coming into it. So, it feels like it’s trending upright. The acceptance and confidence, screams this isn’t only a ‘boy’s game’. Of course, this is not only a white man’s game either. I feel like it’s gotten better though. There’re still some huge gaps and I look forward to JCC (Justin Credible Cultivation) being able to fill it.

You kind of mentioned that you would connect with someone, another woman of color when you first met them. Do you feel like that harnessed any sense of community among women of color in this industry?

Oh, absolutely. Because you know that you’re not the only person, you have another person there. So, if you have to speak or just be in certain circles, at least you know that there’s somebody else that you can lean on. And we’re not all secretly, we’re all telepathically, rooting for each other. There’s that automatic – just guaranteed – solidarity. Even if they’re two different sides of it, you still have that type of connection because we’re in this together. Absolutely.

You kind of touched on how you are empowering women and other women are empowering you. So, what advice do you have to women or single moms who are nervous about stepping out and trying any new career?

That’s great and really inspiring. So, we know you balance a lot. So, we kind of want to know your secret. How are you managing parenting and working as a COO through this pandemic?

That’s a really good question. Of course, the pandemic, – especially that – changed everything for everyone. As far as being the COO and then parenting. Honestly, I’m super grateful and super blessed that I have a strong support system to help. Not just with the traditional aspects of parenting. They’re helping me to remember, who I’m doing this for. The fact that I am giving my daughter someone to look up to. As well as still, make sure you brush your teeth and brush your hair… you know what I mean?

Also, Communication is key. I talk to my children, and I let them know all of what’s going on. Making them apart. So, when I have conferences and meetings, I bring my children with me. So, that we’re able to have the conversations; They’re able to see, ‘This is what mommy is doing. This is what she has going on.’ So, even at times when I might have to be away, they know what’s happening. They are with me and a part of this too. There is no separation between being a mommy and being a boss. I can be all of those things. And still, be everything that you need me to be too.

You mentioned that you want to give your children a powerful woman to look up to. I think you’re really exemplifying that. So how do you plan to create a blueprint for all women that are coming behind you in this industry?

That’s a good question. As far as confidence and owning who you are, that already stands in itself. Operationally, I know being able to connect with some of the brilliant women that I know to great jobs. Job creation is always going to be a strong standpoint, especially in upper management positions.

Not to limit yourself by entering things lower level. This is an industry that can actually allow you to grow. You can use your skill sets. Yes, there’s still a lot of education that needs to be done, but when it comes to the cannabis industry – there are no limits.

Just like me, with my IT experience, I was able to take something completely unrelated and be able to thrive in this industry. So, just knowing that you can take the skills that you have and bring them. Like you don’t have to … I don’t have to have this deep background in agriculture. If that fits you then great, there’s that. But then there are so many other areas where we can grow, for sure. 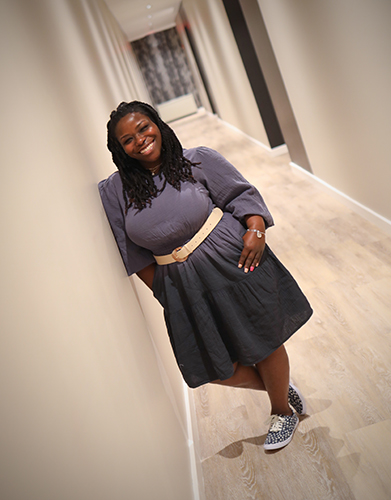 Stay up with JustinCredible Cultivation and Che’Toia Walker here.

This feature was submitted by Nia Rice

Tanzania “Nia ” Rice was born in the Washington D.C. area and currently resides in Los Angeles California. For the past 8 years, she’s told stories for musicians, cultural leaders, entrepreneurs, and more. She’s confirmed her love by becoming a 2x author of “Eventproof”, list in Huffington Post as the Nation’s top 25 Rising Publicist and stepping on red carpets for box office films. She’s curating the life she wants, to assure your story is told flawlessly.