It’s not every day that you get the opportunity to interview one of your idols and teenage crushes (let’s be honest—adult crush too). So, when I found out the zoom interview I’d be having was with none other than 90’s heartthrob, Denise-missed-out-on-a-great-thing, one half of tv’s favorite couples, Mr. Dwayne Wayne, Kadeem Hardison himself—my excitement was through the roof. But I calmed myself, put on my professional glasses (I wish I had flip-up ones just for this moment) and did some more research on his new show, Moonhaven. What made the experience even more amazing was how gracious, humble, and personable Hardison was in real life too. We talked about the show’s unique approach to policing, his favorite roles to play and if he ever gets tired of being associated with “Dwayne Wayne” Check it out!

According to Deadline, Moonhaven is a “suspense thriller [that] focuses on a lunar cargo pilot and smuggler 100 years in the future who finds herself accused of a crime and marooned on Moonhaven, a utopian community…built on the moon to find solutions to the problems that will soon end civilization on Mother Earth”. Hardison shared that it was the series’ unique ideas “about a society that could sustain itself without crime” and things that plague us here on earth, that made him feel like he had to be a part of this project. Hardison who plays Arlo, a detective on the utopian moon, highlighted that what separates this series’ detectives from others, is that “they concern themselves more with the victims and living rather whodunnit and why”. He went on to share that taking on this type of empathetic character was a revelatory experience for him because for the first time, he was able to imagine a kind of policing where “they’re more concerned with you and how you’re dealing with the grief”.

“What if instead of kicking down doors and looking for the bad guys—and in the wrong spots sometimes—what if they came at the victims and were like “how are you dealing with your grief? Because your balance contributes to my balance”

—a revelatory idea that echoes the sentiments of many black and brown people during the most recent years. 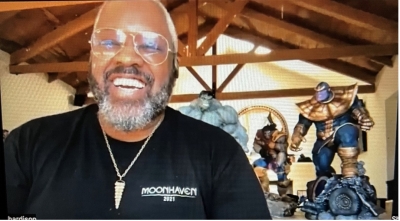 Hardison during the zoom interview

When it comes to picking types of projects and characters to take on, Hardison shares that he prefers dramas, but always seeks to “bring a little comedy or levity” to the genre. He goes on to name some of his past projects—from being a showrunner on the hit OWN series, Love Is, to playing a bitter, old bounty hunter on Teenage Bounty Hunters—to showcase his willingness to take on roles that both “feel good” and “timely”. The latter being the reason why he was excited to play “a detective on the moon, where there is no crime and no real “need” for a detective, but there is, because we approach it [policing] different”.

The Cast of A Different World

Because of my absolute obsession and devotion to A Different World and its perfect love story (that is Whitley and Dwayne), I couldn’t end the interview without mentioning something about his iconic role—I asked Hardison if he ever gets tired of the “Dwayne Wayne” references or being associated so heavily with the legendary show. This is what he shared:

“In 1991…yeah, I was tired of folks calling me Dwayne, but now, no, it’s love—it got me my house…The show has aged well, it’s still watchable and has its really good, teachable moments. So no, no, I get it! Henry Winkler is still known as Fonzy so, you can’t be mad at that”

You can catch Kadeem in his new series Moonhaven on AMC+ premiering July 7th. You can also catch him in Lincoln Lawyer (the series) and Teenage Bounty Hunters, both currently streaming on Netflix, and in ClearMind, an independent film, premiering in the coming months.