Lil Savvy Up Next : Cancer Couldn’t Stop Him

Kalen Hawkins, popularly known as Lil Savvy is an American rapper and songwriter from Atlanta, Georgia. While pursuing a career in music, he was diagnosed with cancer. In 2018, he overcame it and the following year, he released his debut album titled, Everything Profit. We caught up with Lil Savvy to discuss what he’s planning to conquer next, his battle with cancer, and much more!

Tell us about your battle with cancer in 2018.

My battle of cancer was tough. One day, I was feeling sick, tired, fatigue. I mentioned to my girlfriend at the time, if it didn’t get better in two days I would go to the hospital. On the third day, I felt worse, so we went to the ER. I was told it was nothing serious. When I disagreed, so we had an x-ray done. When we got the results, we saw that there was a mass in my chest and they said it appeared to be cancer. That moment changed my life for the next five years. My family and I got through it together, I couldn’t be around friends for two to three years. Due to chemotherapy treatment, I didn’t have hair and I began to lose muscle and weight. I felt weak but I kept a strong heart the entire time.

During this time, I wrote music to ease the pain and make time go by. I began by listening to beats and putting music together. When I got out of the hospital, I began going to the studio to write music. My life seemed to be getting better.

Today, I am working on things that I love. The day I found out I was diagnosed with stage four cancer; I was just about to graduate from Georgia State University. It was a long bumpy road but I finished.

What inspired the release of your debut album, Everything Profit in 2019.

I love the hustle and grind of making money. I hate to see someone with talent and not use it to their advantage! I hate to see someone not trying to make money but complain about how they don’t have money, so that album was to motive people to get off their butts and go make some money and make profit.

The idea of the title “Everything Profit” was to get people’s attention and motivate them to hustle to make “profit.” I would rather them invest in their music to make more money which is profit whether than to spend money on unnecessary things and lose profit!

I am currently working on a gospel album but I don’t have a title for it yet. I just made the transition from Hip- hop to Hip-hop gospel. Why? Because I found my purpose in life was to put out positive energy to the people. I feel like people need to give their life to Christ. I plan on doing that by putting out hip hop gospel music, so people can get a Godly feeling and a hip hop feeling at the same time. There aren’t many artists that are in that this genre so I plan on making my mark quick in that industry as my name “Lil Savvy” will remain the same!

What piece of advice would you offer our readers?

Trust God do what you love and stay healthy. The reason I say this is because I didn’t know I would have stage 4 cancer. I could have possibly died if I didn’t go to the doctor, so my advice is to see a doctor if you feel sick or if it’s not getting better! I also want to say trust God, I believed in God, my family prayed for me, and everything worked out in my favor. I come from a Christian-based home. My parents are pastors of mega churches in Atlanta, Bishop Gary Hawkins of Voices of Faith Ministries, so they prayed for me and everything worked out in my favor! Also, when I say stay healthy, do things like working out and eating healthy! I don’t eat pork anymore or chicken, so I changed my diet to eating more clean vegan meals. And lastly, do what you love because you never know when it’s your last day on earth so do what you love! 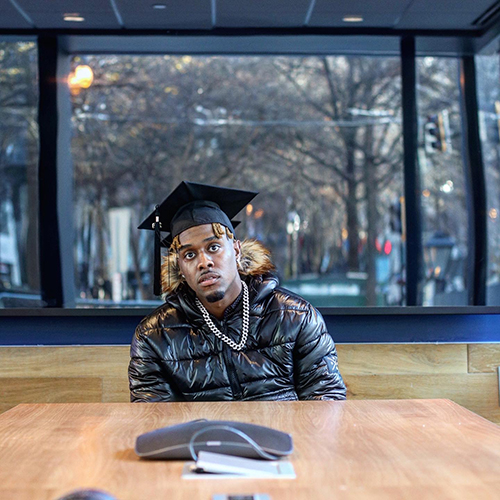