Meet Christie Taylor:  A Phenomenal Woman of the Airways

Christie Taylor describes herself as “An Artsy Soul in a Media World,” which is a perfect way to summarize all the fascinating experiences she’s had on and off the air.

She’s worked in radio for over 20 years and  found a perfect niche for her personality: simply interviewing people and getting them to share their stories.

She’s acted in commercials, sang professionally, wrote screenplays and her own book, directed plays and films, and produced her own spoken word album, “From My Heart: The Collection of Inspirational Thoughts.”

She has her own television show in six markets that is also available as an audio/video podcast, “The Christie Taylor Show,” where she offers conversational-style interviews with interesting people. She has also partnered with fellow radio star Tina Tilton for “The Taylor Tilton Show,” another popular podcast on Spotify and YouTube.

“I was recently asked to give advice for anyone who wants to follow in my footsteps,” Christie Taylor said. “My first advice is ‘don’t follow in my footsteps since I’ve taken so many detours along the way!’ I tell people not to take shortcuts, blaze your own trail, learn your craft, and maintain your personal integrity.”

Today, she’s involved in several entrepreneurial ventures, starting with Christie Taylor Consulting, a media training consultancy and public speaking coaching service with an e-learning platform. She also owns RadioGryl Media/Productions which creates content for audio/video/digital platforms and distributors, and The Script Polishers, which focuses on script consulting and training. 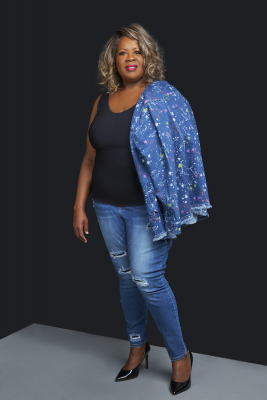 Christie Taylor was born in Washington, D.C., and her family later moved to West Tennessee. She was always interested in the performing arts and radio. Though she initially studied Music at Oral Roberts University, she switched her major to Communications, with a focus in Radio, TV and Film.

She paused her formal education to move to Detroit to try life as a full-time gospel singer. During down times, she studied to be an administrative assistant, and  these skills landed her a secretarial job at a top Urban FM radio station.

“I was just excited to be in the building, even if I wasn’t on the mic,” she said. “The General Sales Manager eventually broke the radio game to me, then I moved back to  Memphis, and started my career in radio.”

With these new skills, her natural abilities, and creative personality, Christie Taylor was able to jump right into all sorts of broadcast roles throughout her radio career, including hosting entertainment and public affairs shows as well as being a genuine, award-winning radio personality.

Through it all, she’s felt a need to give back. She’s received a variety of awards for service, including the prestigious “50 Women in Memphis Who Make a Difference,” presented by Memphis magazine.

“I grew up where ‘it’s more blessed to give than to receive’ was a foundational idea – service is really part of my DNA,” she said. “I’m really excited about supporting causes that positively impact children and the arts, and I also have deep passion for cultural anthropology, especially in relation to the history of Black people in the South and the African Diaspora.”