A Brief History into the Growing Trend of Body Piercings

By the early part of the 20th century, piercing any body part other than the ear lobe had become uncommon in the West. However, after World War II, it began increasing in popularity among the gay male subculture.

Even ear piercing was culturally unacceptable for women for a time, but that relatively common form of piercing began growing in popularity from the 1960s. Then, in the 1970s, piercing began to expand, as the punk movement embraced it, featuring nontraditional adornment such as safety pins; and Fakir Musafar began popularizing it as a form of Modern Primitivism which incorporated piercing elements from other cultures, such as stretching.

Body piercing was also heavily popularized in the United States by Californians, including Doug Malloy and Jim Ward. Ward (inspired by and with money from Malloy) opened The Gauntlet as a home business in November 1975 and then a commercial storefront operation in West Hollywood on 17 November 1978. The establishment of this business – considered the first of its type in the United States – was the beginning of the body piercing industry. 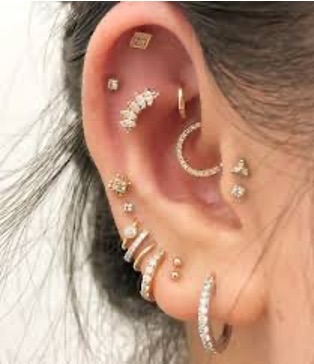 Modern body piercing practices also include dermal anchoring or dermal piercing, which combines piercing and implantation to create a single point of opening in the body (whereas pocketing makes two) to permit one end of the jewelry to show above the surface of the skin. While this technique can be performed almost anywhere on the body, as of 2007, it was popularly done between the eyes, on the chest, or on the finger to simulate a ring. Again, the practice of body piercing is subject to trends and fashions.

Belly button and eyebrow piercings were popular during the 1990s when the piercing trend entered the mainstream. In recent years, septum piercing and nipple piercing have been considered highly fashionable. Additionally, the practice of ear lobe gauging or stretching has become popular with the turn of the century. A 2005 survey of 10,503 people in England over the age of 16 found that approximately 10% (1,049) had body piercings in sites other than the earlobe, with a heavy representation of women aged 16–24 (46.2% piercing in that demographic). Among the most common body sites, the navel was top at 33%, with the nose and ear (other than lobe) following at 19% and 13%.

The tongue and nipple tied at 9%. The eyebrow, lip and genitals were 8%, 4% and 2%, respectively. Preference among women followed closely on that ranking, though eyebrow piercings were more common than nipple piercings.