His name was Sidney L. Poitier and he was born two months premature on February 20, 1927, in Miami, Florida. He would remain in the hospital in Miami for three months until he became healthy enough to return to the Bahamas. Sidney grew up on Cat Island, Bahamas and he lived in poverty while in the Bahamas.  He was the son of tomato farmers and his father also drove a cab in Nassau. Sidney’s parents were Reginald and Evelyn Poitier and they had eight children with Cyril the oldest child and Sidney was the seventh child.  Cyril and his wife had 10 children of their own in Miami, Florida when Sidney was sent to live with them at age 15.  He was sent to Miami to stay out of trouble in Nassau, Bahamas.  Cyril knew that Sidney looked up to him and Cyril was very strict with Sidney. Cyril ran a child daycare for 17 years and went into acting at the age of 53 for money. His first film was “Big Enough N’Old Enough” but, Cyril was known for Savages from Hell (1968) and The Daredevil (1972), and A Piece of the Action (1977).  He died on November 13, 1991 at 80 years old, of cancer in Miami, Florida. Sidney had nine aunts and uncles and many cousins in his family.  He was a Bahamian-American actor who won an Oscar also a director, activist, and ambassador.

Sidney would stay in Miami until he left for New York City at the age of 16 and he did a brief stint in the Army.  He went to Washington Carver School for a while and then quit and worked in a grill.  Sidney did not like school and all the rules that you had to follow.  He would learn in the world of hard knocks but, he would learn to value education and to read and write when he was in his mid 20’s.  He married his first wife, Juanita Hardy in April 1950 at the age of 23. They were married for 15 years and raised four daughters in Stuyvesant, New York. The children were Beverly, Pamela, Sherri, and Gina.  The daughters loved both of their parents and they were successful in their own right.  All of his daughters from his first marriage are alive except Gina.  She died at the age of 57, “quickly and unexpectedly” on May 27, 2018.  She left a husband, Gaetan, daughters – Guylaine and Gabrielle, and a son Etienne.

While Sidney, was starring in The Lost Man in 1969, he also had a female actress co-star, named Joanna Shimkus, a Canadian actress.  The two got married on January 23, 1976, and were married for 46 years.  Joanna was with him when he died on January 6, 2022, at the age of 94.  He died of heart failure or cardiopulmonary failure but, also listed on the death certificate were Alzheimer’s disease and Prostate cancer. Sidney Poitier died at his Beverly Hills home and he had a net worth of $20 million. Joanna and Sidney had two more daughters- Anika and Sydney Tamiia.

Sidney Poitier would first experience movies at the age of 11 in Nassau, Bahamas. He would work manual labor jobs for many years until he got a break as an understudy for actor-singer Harry Belafonte in a play called Days of Our Youth, He appeared one night in the production of the Greek comedy Lysistrata, where he messed up the lines and ran off stage but, his brief appearance really impressed the critics that he ended up getting more work. So, in 1950 Poitier would make his film debut in the feature film “No Way Out” – where he played a doctor who is tormented by the racist brother of a man whose life he could not save. He would also appear in the South African tale Cry, the Beloved Country, the classroom drama – The Blackboard Jungle, and The Defiant Ones. This film co-stars Tony Curtis and the two play prison escapees who are chained together, their struggle helps them past their differences and learn to respect each other. Well, the 1960s is when Sidney Poitier would really make his mark on the American Film culture.

He would star in Lorraine Hansberry’s play “A Raisin in the Sun, in a role he had developed on the stage.  Poitier would earn an Academy Award for Lilies of the Field (1963) where he played an American serviceman in Germany. In 1967 he would have three hit movies – To Sir, With Love – where he plays a schoolteacher, and “In the Heat of the Night” – he is a black detective from the North who helps solve a murder in a southern town.  Poitier ends up gaining the respect of the prejudiced police chief there. Now, these are some examples of Sidney Poitier breaking down barriers of racism in the film industry.  In the comedy “Guess Who’s Coming to Dinner”, with Spencer Tracy and Katherine Hepburn.  Poitier’s character is engaged to a white woman. This was Hollywood’s first love story between members of the opposite sex that did not end tragically. Sidney Poitier remarked to Susan Elliott, with the London Times.  “I suited their need. I was clearly intelligent; I was a pretty good actor.  I believed in brotherhood, in a free society. I hated racism, segregation. And I was a symbol against those things.”

At the American Film Institute (AFI) in 1992, actor James Earl Jones made a tribute to Sidney Poitier. “He marched on Montgomery and Memphis with Dr. Martin Luther King, Jr., who said of Poitier.  “He’s a man who never lost concern for the least of God’s children. Then, Rosa Parks, who in 1955 became a Civil Rights Hero simply by refusing to sit in the “negro” section of a Montgomery bus, attended the tribute and praised Poitier as “a great actor and role model.” Sidney Poitier said in his speech at the (AFI) Tribute that he welcomed young filmmakers into the fold and urged them to “be true to yourselves and be useful to the journey.” In 1972, Sidney co-starred with Belafonte in the western Buck and the Preacher for Columbia Pictures after an argument with the film’s director, Poitier took over.  Though he and Belafonte urged Columbia to hire another director, a studio official saw footage Poitier had shot and encouraged him to finish the film himself. 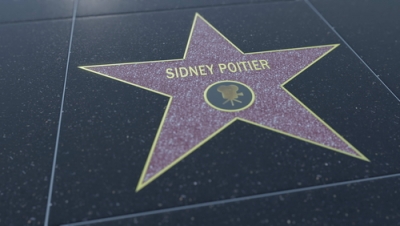 So, Poitier went on to direct three features starring comedian Bill Cosby in the 1970s; Uptown Saturday Night, Let’s Do It Again, and A Piece of the Action.  They also worked together on the comedy Ghost Dad (1990), and it was a disaster.  Sidney Poitier also directed the hit comedy Stir Crazy (1980), as well as several other features. During the 1980’s he took only a handful of film roles but, in 1991 he played Supreme Court Justice Thurgood Marshall in the television film ‘Separate but Equal.’ Then, in 1992, Sidney returned to the big screen for the comedy-drama Sneakers which co-starred Robert Redford and River Phoenix. He would return to television for the 1995’s western drama “Children of the Dust”.  He continued to star in television movies with To Sir with Love II (1996) and Showtime drama Mandela and de Klerk (1997). This follows the story of Nelson Mandela’s last years in prison to his election as leader of South Africa and both received mixed reviews.

In 2000, Poitier received the Screen Actors Guild Lifetime Achievement Award. In April of that same year, The Measure of a Man: A Spiritual Autobiography (the story of his own life) was published. In February 2001 Poitier won a Grammy Award for the best spoken-word album for his reading of the book. Sidney Poitier was presented with the NAACP’s Hall of Fame Award in March 2001.  Then, in March 2002 Poitier was awarded an honorary Academy Award for his long, dignified career.  The award was especially meaningful because it came on the same night that African-Americans won both the Best Actor (Denzel Washington) and Best Actress (Halle Berry) Awards.

Sidney Poitier has accomplished many achievements for an African-American Actor it is hard to adequately express our gratitude that he did not forget where he came from and what it means to grow up in poverty without basic needs.  He contributed to numerous organizations to help improve individuals’ lives.  Sidney believed in a different world where everyone was free and lived in peace.  He worked hard to make sure that the “powers that be” understood that it was time for a change in America and the world.  Mr. Sidney Poitier, we want to say “Thank You” for your courage, intelligence, and tenacity in the face of racism, discrimination, and civil unrest. You never gave up and you kept pushing until a change came in Hollywood Films and the Civil Rights Movement of the 1950s and 1960s.  We could not have made it through those times without your audacity and vigor.  May God Bless your wife and your beautiful daughters. Rest in Peace, my friend.