Kimberley Baker Guillemet, who grew up in South Los Angeles, received her undergraduate degree from Stanford University and her law degree from the University of Southern California’s Gould School of Law. She has taught at the elementary, high school, college and graduate levels, and has been a lawyer, public speaker and facilitator, and is currently a sitting judge. Spurred by the desire to support young people, she launched , a website that offers inspiration and motivation to young people by providing resources to help them feel equally valued. Baker Guillemet resides in Los Angeles with her husband and their four daughters. In her spare time, she enjoys writing, motivational speaking and mentoring young people.

In a moving new memoir, Black Prep: Life Lessons of A Perpetual Outsider, author Kimberley Baker Guillemet provides a how-to guide for not just surviving, but thriving in the face of adversity.

“I learned early in life that mindset matters,” says Baker Guillemet. “I repeatedly received the message that I wasn’t privileged enough, connected enough, smart enough, pretty enough, thin enough, even Black enough. And for a time, I believed it. Only after I decided to reject those messages, did I begin to thrive.”

In Black Prep, the South Los Angeles native who later became a successful lawyer, chronicles how she navigated educational and professional environments that were both foreign and uncomfortable.

Baker Guillemet’s journey began at the age of 12 when she was accepted into an elite, all-girls college preparatory school in Los Angeles. She was among just a handful of Black students and was wholly unprepared to prosper in an intensely competitive environment where few people looked like her.

“The initial transition into my new environment was jarring. I was not the quintessential prep school student. I had to learn to forge ahead in spite of the preconceived notions of others based upon my ethnic background, body type and socioeconomic status. But my biggest obstacle was the way I saw myself,” she says.

Although Baker Guillemet had no roadmap to help her navigate her new environment, she managed to thrive nonetheless. She now wants to equip others with the same armor she used to handle situations that were at times emotionally, intellectually and socially taxing.

Through her four pillars of success, the author offers concrete steps readers can take to change the course of their lives. For example, she urges readers to embrace their unique strengths.

“I want readers to understand that their uniqueness, background, perspective, and all of the things that make up the texture of who they are make them the prize. They are the asset.”  She continues, “No longer should students from underrepresented groups feel as if they are an awkward plus-one at a dinner party. They should feel the same sense of belonging and ownership as everyone else on their campus regardless of their financial background, their pedigree, their ethnic background, their parents’ station in life, etc.”

The personal stories Baker Guillemet shares in Black Prep will take readers through a range of emotions, from laughter to tears to heartbreak, simultaneously providing reading enjoyment and invaluable life lessons.

“I know many adults who still haven’t healed from traumatic experiences that happened during their early years,” she says. “My approach to healing those wounds is not so much about changing the spaces, but is more about changing the way we think about who we are.”

Baker Guillemet’s unwavering desire to help others is evidenced by her impressive legal career. After graduating from Stanford University, she returned home to teach elementary school in South Los Angeles. When she decided to attend law school two years later, she chose USC, in part so she could continue teaching in her community while studying law. After law school, she worked as a disability rights attorney, then moved to the California State Attorney General’s Office, serving in both the Jerry Brown and Kamala Harris administrations. During her tenure there, Baker Guillemet practiced consumer protection law and later on worked as a criminal appellate lawyer. From there, she was appointed the inaugural director of the first-ever Office of Reentry for the City of Los Angeles by Mayor Eric Garcetti.

“It’s my hope that parents and teens will read Black Prep together and discuss its takeaways,” the author says. “The book includes discussion questions which help facilitate robust discourse.”

Baker Guillemet adds, “The book is not just for people of color. The issues raised in Black Prep, while addressed through my personal lens, are universal.” 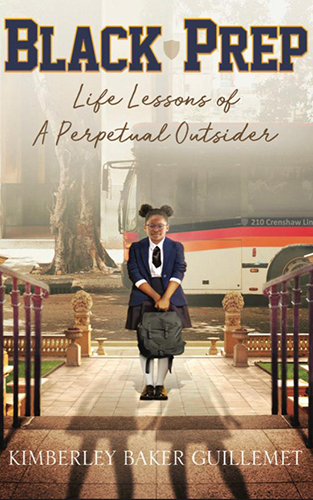 In addition, Black Prep isn’t just for youth. Baker Guillemet’s journey will resonate with anyone struggling with acceptance, including adults trying to find their way in corporate America.

“I want young people in particular to understand that while there is definitely a time and a place for demanding change,” Baker Guillemet says, “A lot of the work that we need to do in order to thrive and alter the trajectory of our personal paths is internal. I’m a living example that the right mindset can literally change your life.”

Black Prep: Life Lessons of A Perpetual Outsider is now available at Amazon, Barnes and Noble, and Kobo.