Abi Salami is a popular, visual artist based in Dallas, Texas. A diverse group of art collectors is in line to purchase one of her masterpieces. What is so amazing about Abi is that she celebrates Black/African womanhood’s beauty and essence while highlighting the importance of positive mental health. As a University of Texas graduate and former member of Corporate America, painting has always been an escape as Abi suffers from bipolar disorder. Painting takes Abi to a place of normalcy, and now she shares her peaceful refugee in the form of art with the World. Self-taught, Abi has exhibited across North America and been featured in various art publications. 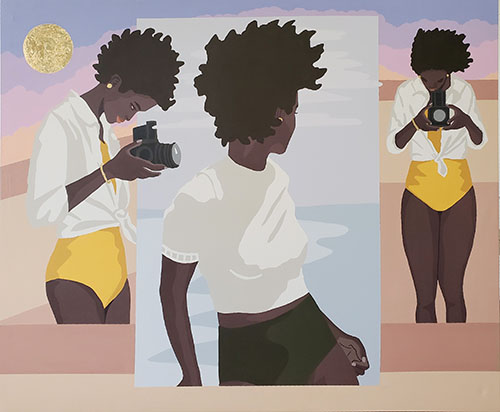 “I’m excited to be able to share my artwork, which promotes positive depictions of black womanhood while promoting positive mental health. My hope is that my message will reach a broader audience and hopefully help those who are struggling with self-esteem or other mental issues because they don’t see themselves adequately represented in the media. I’m looking forward to tearing down debilitating stereotypes and taboos and replacing them with positive messaging and imagery,” says Abi Salami. Recently, Abi has been featured in Pacific Sun and the Marin Independent Journal.

Art lovers should look forward to upcoming virtual exhibits and profiles where Abi will be featured. In the meantime, for more information, click here.

All images courtesy of Abi Salami