It’s the absence of necessity or coercion. It’s the liberation from the power of another. It’s the act of being free. It’s freedom! Often seen as a non-negotiable for many, the art of freedom was once a mere dream. Our ancestral arrival to America often tells of the historical significance of pain, tears, and shifting the atmosphere. Whereas some parts of our African history tell of the overall triumph of independence and freedom. 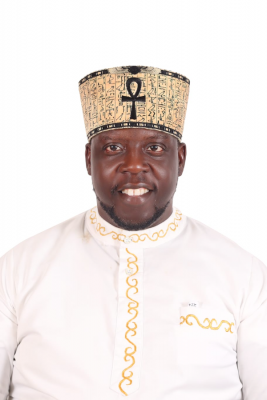 Liberia,  is in fact the first African country to reclaim its independence. Liberia is a country of West Africa that borders Sierra Leone, Guinea and Côte d’Ivoire. More than 15,000 freed and free-born black people who faced social and legal oppression in the U.S. and 3,198 Afro-Caribbeans, relocated to Liberia between 1822-1861. So it’s no wonder that Juneteenth will be freely celebrated in Liberia this year. Set to the vibe of creativity, hip hop, and growth; creators Saqar Ahhah Ahershu and Den Tut Rayay are bringing you the Journey Home Festival in Liberia. 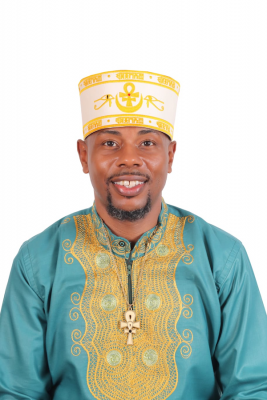 This cultural explosion will spread awareness of Black travel, knowledge, and enterprise with the help of music, film, and more. The Journey Home Festival is slated for a week-long celebration from June 17-26, 2022. Here’s what Saqar Ahhah Ahershu and Den Tut Rayay shared about the historical landscape, event happenings, and more:

What inspired the Journey Home Festival?

“A brother named Bamba who was a vendor at a festival we hosted in Atlanta inspired us to go to Senegal.  That was my first time in West Africa, or on the continent for that matter.  We also visited The Gambia and I just remembered not wanting to go back to the states. We actually missed our flight and had to drive back to Dakar from Banjul. It was exhilarating! After making that trip and going to Senegal’s Goree Island, we began thinking.

That’s when we were introduced to Liberia and that’s when we decided the first Journey Home Festival on the continent had to happen in Liberia.” 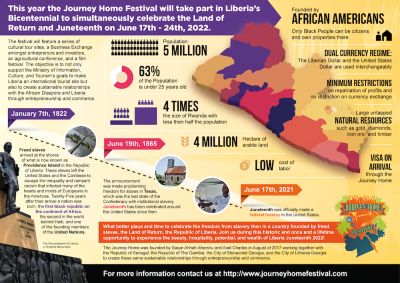 What impact can Liberian culture have on Black travel and history?

“Liberia is one of the most culturally and historically rich destinations for an African American.  This could become an ultimate vacation spot for us on the continent. We can experience culture, our history; and enjoy beautiful beaches, coconuts and cocktails all at the same time! All of the names of the free Black men that were on the ship that landed on Providence Island are recorded on a memorial and these could be your great great great cousins. The story is so rich and empowering for all to learn. Africa’s first Black Republic and the First African-American President of JJ Roberts all occurred in Liberia.

This could not only change where we spend some of our leisure time but also our mindset.”

What historical implications are important to know when referencing Liberia?

“Liberia was founded by African Americans. It also had the world’s very first female President who is also a founding member of the United Nations. Another historical significance is that it’s called the “Land of Return”.”

How has the global pandemic shifted the culture and community within Liberia?

“The government has done a great job of making the public aware of the global concerns and encouraging proper precautions. However, with living in Liberia there is a level of normalcy. Many only wear masks when you enter into a meeting to show respect.”

How are you using your influence to change the narrative?

“I was born of parents from the Country of Haiti and raised in Brooklyn, New York. I had an understanding that people were there before Christopher Columbus even arrived.  Therefore, I have an appreciation for the Liberia  story of independence. It’s not an easy task,  however, its a narrative that is R

rich that we as African Americans should know about. We wish to implement a celebrity echo of our acknowledgment of the Founding of the Country, the Republic of Liberia.”

What’s next for your brand?

“The Journey Home Festival is still a baby.  After the Juneteenth experience, we will be shifting to second gear for our second activation for the first week in December. We will be partnering with athletes to open up clubs such football, basketball, tennis and boxing. We will also be putting together a concert to demonstrate a musical culture exchange. This is just the beginning for the Journey Home Festival.”

Writer C. Scott is an authorpreneur, mom and freelance writer who also offers literary services. Follow her online as @curls_coils.