Actor Dwayne H. Moore Talks Lead Role in “The Rainbow Prince” and Being an Inspiration

In the film, The Rainbow Prince, Dwayne H. Moore plays Rainbow, a Prince in need of heroine Princess Marea’s help after a wizard places a spell on him that’ll send him into a deep slumber if he doesn’t receive a kiss from his true love. The star of the newest children’s film talked exclusively with SHEEN about his character, the importance of representation, and being an inspiration.

So, of course, I have to start with how did you get the role of Rainbow?

My agent sent it to me, and I just studied. I remember feeling connected with the script and falling in love with it.

Did you have to prepare for this role, or did being a Prince come naturally?

I think a little bit of both. I think being a Prince is very natural. But also, you know I never want to discredit the preparation that I’m not playing with my acting coach, and like, the cast and crew. So, a little bit of both, but more so on the natural parts. [laughs]

This film changes the traditional fairy tale narrative. How important was it for you to be a part of The Rainbow Prince?

It was very important just with my background. I studied Sociology and African American studies in college. Just being able to portray a Prince that’s happy when he’s Brown and his skin changes colors based on this emotion. To bring that to the big screen and for kids to see it or just anyone to see it warms my heart. It’s important to me. So, for me and my young acting career, landing a role like this has been beyond my wildest imagination.

How would you describe your character to children who haven’t seen the film yet?

I would describe Rainbow as a very loving person. Sometimes he’s so loving, caring, and maybe naive. But he’s just trying to find himself and grow. He has to be honest with himself about how he feels, what he likes, and what he doesn’t like. So ultimately, he can succeed and choose the right path forward, and I think it’s very important for kids because it’s a life lesson about making sure that you’re honest with yourself, then making sure that you’re leading with love. 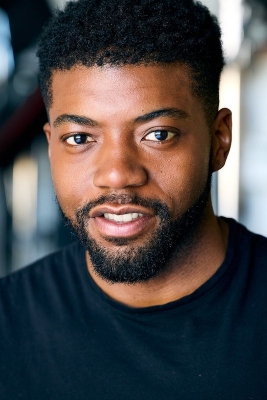 You got the opportunity to return to your old elementary school to showcase the film. How did that feel? And what were the reactions of the children?

It was surreal. When I was in the 4th grade, I was selected as a future leader, and they painted me amongst other students and other leaders on a mural in the auditorium, and it’s still there. To come back and say, I guess I’m living up to the title of leader. It was truly an amazing experience. The students did a Q&A, and at least 20 came up and asked questions. They were really in love with the film. They asked such great questions about the film and my process as an actor. They asked questions that just showed that they were inspired. Those students interested in becoming an actor wanted to know the process. They told me how important it was that I was there. Even though it’s one school with one auditorium, I never know whose life I was able to change or who might have a different outlook on life based on that showing and me being present, so I’m forever grateful for that.

How much of an impact do you believe this film would have on young black children?

Lastly, for children who watch this film and now look at you as an inspiration, what advice would you give them?

Wow, it could be you next, and that’s what I told students at elementary school PS132. When I went there, I was like, listen, you know this is me, and I’m starting, but I want you to understand that it could be you next. You’re capable of doing even bigger and greater things. And if I’m a living testament of that, then that’s great, and you could see that within me. Ultimately, if you believe it hard enough and work towards it, there is a lot of attraction to bring it your way. So, I think that was a very important thing that I just wanted the students to take away with, and hopefully, anyone that sees me as an inspiration. I have hopefully felt inspired in that way as well.

To learn more about The Rainbow Prince, visit their website.

To learn more about Dwayne H. Moore, visit his website.