That is why I wish to humbly share a few words about a strong African American woman who is carrying on that tradition in my hometown, Detroit.  Her name is Alison Vaughn, and she is the founder and CEO of the nonprofit Jackets For Jobs.

Since it began operating 20 years ago, Jackets For Jobs has helped nearly 30,000 job seekers.  In addition to providing professional clothing, free of charge, to people of low income, the organization provides other resources and services that help people obtain and retain employment.

Lost in all of the serious public health issues we have been experiencing in this country, and throughout other parts of the world, Jackets For Jobs hosted Detroit’s “National Smart & Sexy Day” event on March 12, which helped 25 local women who are trying to enter or re-enter the workplace.  Like so many strong women that have been moved to lead, Vaughn has provided needed support to an often voiceless segment in our society, in this instance we are talking about single African American mothers.    The vast majority of people that have been helped during Jackets For Jobs’ 20-year mission have been single African American moms and Vaughn wants her city, nation and world to know their importance.  And so, the show had to go on at Detroit’s Samaritan Center, on the city’s east side. 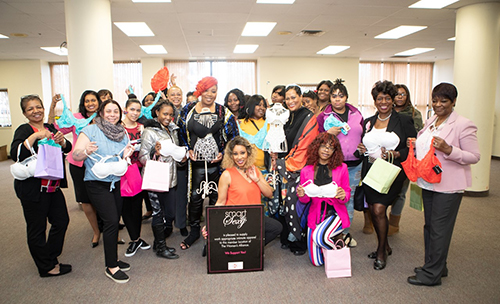 “When we empower women, we empower families and communities, therefore this was a very important event for the city of Detroit,” said Vaughn, whose organization reached out to local workforce agencies to identify the women that participated in the “National Smart & Sexy Day” event.

“In order to empower women for sustained success in the workplace we must address the whole woman.  That is why we were so excited that our program included words of wisdom from renowned local experts in the areas of health, fitness, appearance and more.”

National Smart & Sexy Day was launched in 2012 by the Alliance of Career Development Nonprofits (ACDN), formerly known as The Women’s Alliance.  The Detroit event coincided with the celebration of Women’s History Month throughout March.

Vaughn, the author of “Ms. Goal Digger, Success is Sexy,” a guide for today’s businesswoman, said there was an abundance of “smart and sexy” fun during her event, including accurate fittings and free foundational garments from Smart & Sexy, one of the largest privately held lingerie companies in the country.  But all fun aside, Vaughn said the mission of her organization is too important to be stopped or slowed down by anything.

“I think our mission is one that everyone can understand,” she said. “Our mission is to help people find and retain employment and everyone understands the importance of a job.”

For more information about Jackets For Jobs, click here!

This feature was submitted by Scott Talley