Alphonso Settles: A Rising Actor Determined To Make His Permanent Mark in the Industry!

Alphonso Settles has appeared and starred in multiple films and tv shows starring in movies like The Bag Girls, First Lady (Jim Jones), Deceitful Passions, and Turn Of The Cheek.

Who is Alphonso Settles?

Alphonso Settles is an African-American actor, model, and hard-working father who stands at 6’6 255lbs! I also enjoy watching movies, video games and working out in the gym as often as possible.

Did you always have the desire to be in the entertainment industry growing up?

I did always have a desire to be in the entertainment industry, but I never even knew where to start. So, I was heavily into basketball growing up, I didn’t start getting into acting until about 4 years ago. After I did my first film I was bitten by the acting bug and hooked.

Can you tell us more about how you got started?

I initially started on the modeling scene. I did a lot of runway modeling and eventually became a published male model which led me to go into the acting world. I was blessed to share the screen with John Savage in Ovid And The Art Of Love. After that film, I’ve been working consistently since then.

You’ve had the opportunity to work with some major legends in the industry, such as Rodney Perry, Clifton Powell, and John Savage, what was that experience like and what did you gain from them that you hold tight to and share with those coming up behind you?

Yes, I have been blessed to work with those talented guys! They were really cool and down-to-earth people, I thoroughly enjoyed them onset. I watched how they moved onset and saw how prepared they were for each scene. Me being a new face during that time, showed me how to show up prepared and ready to work.

Any actor coming behind me I would tell them to work hard and stay consistent and develop a thick skin when navigating thru this industry. I would also tell them do not let fear and rejection stop them from going after the goals they have in mind. 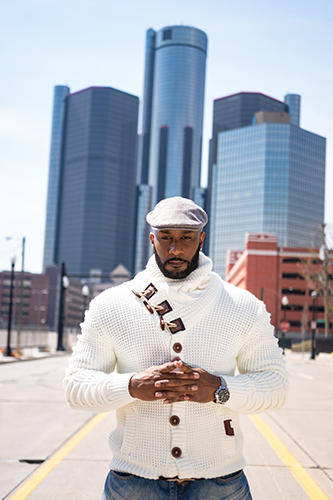 Can you tell us more about your upcoming film, which’s due to release later this year, “Toxsanity?”

Yes, Toxsanity is due out later this year and it shows how toxic relationships can be detrimental and very unhealthy to those involved. My episode is very different from the roles I have taken on in the past so I had fun filming that and I can’t wait for the public to see it! It also is being shot in Detroit as well as Atlanta so it will show different landscapes that represent each city.

“Toxsanity,” was produced and directed by Grammy Winning music producer Bigg Von, can you tell us about that experience?

The experience has been awesome and Von has a lot of experience when it comes to the entertainment realm. He gave me a lot of freedom in playing the role of Jake and is always open to suggestions and ideas, so he made it super easy to work with him. He always makes sure we were comfortable onset and had everything we needed to work.

Do you have any events or appearances scheduled that you are able to share with us?

Yes, on April 17th, 2021 I have a film premiere coming for a movie called “Dear Future Husband”, and then on June 19th, 2021, I have another film coming to theaters called “He Played Me.”

If people want to connect with me, you can find me at Alphonso Settles on Facebook and @Mr.Amazn1 on Instagram, or lastly, send me an email at Alsettles36@gmail.com.

All images by Abby Olidipo of Abby O Photography