Multi-talented artist, poet, rapper, and dancer is preparing for the premiere of his new music video, “UP DOWN” from his exciting EP titled, COVERBOY. The music video for “UP DOWN” will be released on January 14th and pays homage to his favorite movie, The Player’s Club. Ahead of the official premiere, we had the chance to sit down with him to discuss all the details of his EP, the inspiration behind the “UP DOWN” music video, and his partnership with Revry – the first global LGBTQ streaming media network.

Tell us about your EP COVERBOY.

COVERBOY came out last June. It was my fifth project and second EP. My first-ever project was an EP that I put out in 2014 called Midnight on Cloud Nine. I did three albums after that. For the next project, I wanted to do something a bit more conceive. It was my first project after the pandemic. The pandemic in 2020 was hard for all of us. I wanted to make music that people could turn on and dance to and feel good. I wanted it to be a form of escapism. I wanted everyone to remember the fun part about life. That’s what COVERBOY was. 2020 was hard for me in my personal life. I found myself in a dark place and I wanted to pick myself up and keep working. COVERBOY represents that mentality of picking yourself back up through the trials and tribulations that life throws at you. You can still prevail. It’s nine songs, turn up vibes, and my fifth project.

What inspired the visuals behind your music video for UP DOWN?

The music video is the second music video from the project. For UP DOWN, I wanted to do something that was just fun. It’s me in a way that you’ve never seen before. It showcases another side of me that my fans and listeners really don’t get to see often. I’m excited about it. The visuals were inspired by one of my favorite movies, The Player’s Club. I found that movie when I was a little kid, probably a lot earlier than I should’ve seen it (laughs). It was only natural that I paid homage to it in some kind of way in my art. The visual was inspired by the Player’s Club aesthetic and P-Valley show. I wanted to do something fun! I wanted to have guys and girls as part of my imaginary strip club. The video starts off with a scene from The Player’s Club and I remixed it into my own. It shows me walking into Magic City and at the end it shows me walking out. It’s kind of an imagination of my version of Magic City. It’s LGBT friendly but there’s also women throughout the video because I love women. I wanted people to have a good time with this.

Can you give us insight into your partnership with Revry?

Revry was interested in distributing my docuseries. I have a docuseries called Go Hard, which I started at the end of 2020. It’s an ongoing docuseries that I edit and produce myself. I’m very proud of it because you get a behind the scenes look of my career and journey so far. You see behind the scenes of music videos and photoshoots. You see in the studio, interacting with friends, and you see how it all comes together. I put the episodes out on my YouTube channel. It’s been a minute since the last episode, so we were trying to figure out how we were going to go forward with it. Revry reached out and said they were interested in putting it on their television platform, which is a big deal. People can check out my content from their televisions. That’s exciting for 2022. They’re going to relaunch Go Hard. We have some new episodes coming out as well. With this distribution, we’ll be able to reach so many people and hopefully influence and empower more people, which is the overall goal. 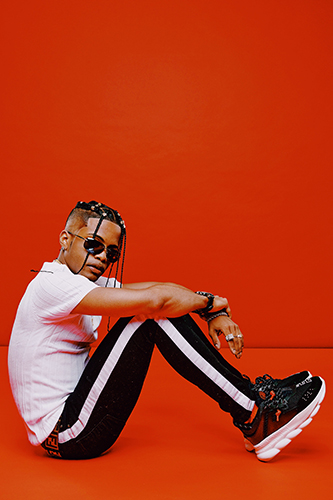 Processed with VSCO with au5 preset

All images by Brandon Champ Robinson