I recently had the opportunity to catch music royalty 112, Jagged Edge, Keyshia Cole & Ashanti in Orlando, Florida, who was participating in a benefit concert for cancer & autism. 112 & Jagged Edge opened up the show with some of their classic hits “Peaches & Crème,” “Dance With Me,” “Where The Party At,” and “Let’s Get Married.” The fellas showed us why they ran the late 90s and early 2000’s. We call this grown folks music. Atlanta’s own Yung Joc hosted with his comedic timing and crowd pleasing antics. Yung Joc had a pleasant attitude and was very engaging with those around him. Even with people waving cameras in his face he showed up and did what he had to do. Joc kept the show moving!!!!! 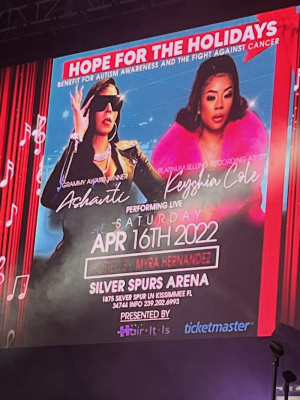 Platinum-selling recording artist Keyshia Cole, a working mother who traveled with her family, was ready to give the audience all of her. Ms. Cole’s background dancers showed out to hits such as “I Changed My Mind,” “Last Night,” and “Should’ve Let You Go. During her set, Keyshia had a wardrobe change, she returned in a jeweled two-piece set paired with some crystal jeweled knee boots to sing some of her greatest ballads, “I Remember’” “Trust,” and ending with “Love.” With a young Mary J Blige vibe Keyshia Cole talked to the audience and really engaged with them about her career and finally reaching that point of peace in her life.

Closing out was GRAMMY Award-winner Ashanti, who recently received her star on the walk of fame and shared with the crowd that she’s working on a movie she’s executive directing.  Ashanti performed some of her greatest hits, such as “Foolish,” “Baby,” and “Awww Baby (Rock With You).” Ashanti did not come to play with the kids she gave us theatrics, booty bouncing moves, a history lesson and provided us with timeless classics. Ashanti really showed us why she’s the definition of a true artist.