When Sheryll Cashin was part of the Clinton White House staff in the 1990s, she noticed her efforts to tackle racial discrepancies in the U.S. weren’t getting a lot of traction.

“I worked for three years on policies intended to stimulate renewal in high poverty in urban and rural areas,” she said. “But I learned that while the federal government directed modest funds to this effort, it was also investing billions in policies that systematically maintained segregation and concentrated poverty.”

After leaving politics, she took the opportunity to take a closer look at the various race-based historical institutions and systems that are still in place along with the state of race relations in the U.S.

Today, she’s still interested in discussing and examining how and why racism and inequality are both so much a part of our culture and our history. She’s written five books on these topics and teaches Constitutional law, race and American law, and American segregation at Georgetown School of Law. She’s also a contributing editor to Politico magazine, which gives her a larger platform to share information and ideas.

Her latest book, “White Space Black Hood: Opportunity Hoarding and Segregation in the Age of Inequality” describes what she sees as an American caste system and suggests ways people can navigate around it.

Continue reading to learn more about how Sheryll Cashin tries to provide hope. 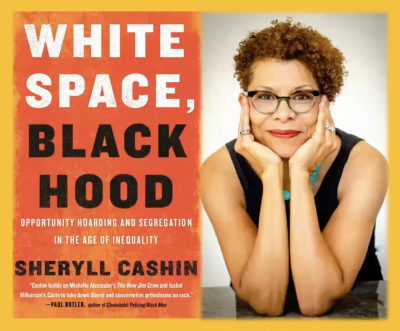 I wanted readers, especially Black American descendants of the enslaved to start to understand the institutions that were created and have been maintained. I want them to be able to shift their self-view from ‘presumed thug’ to ‘presumed citizen’ and for them to find opportunities to start with self-love.

Did your White House policy experience help form your viewpoint?

I saw the challenges that President Clinton had to deal with. He really cared about the inner cities but he also had to deal with some of the policies and politics that went back decades. They started with anti-Blackness roots but evolved into anti-government and anti-tax views. As president, he did some great things but he also had to take part in some of this dog-whistling to win office, which caused harm to many communities, especially the Crime Bill.

Who are some inspirational figures in your life?

I’d have to say, my father, Dr. John L. Cashin, Jr. When Alabama’s Democratic party was dominated by people like George Wallace, he started an independent Democratic party. He even ran against Wallace in 1970, with a group of progressives of many races. This effort began the second Reconstruction effort in the state. He always focused on battling white supremacy in our state. I also have a special spot in my heart for Frederick Douglass. Writers who have inspired me to include James Baldwin and Toni Morrison, and have found support from Dr. Henry Louis Gates.   Keep up with her on via the web at sheryllcashin.com