When Andrea Ward arrived in Hollywood, California in 2016, she was escaping violence but determined to transform her pain into power. She knew that she needed to stand up for herself and to herself, challenging years of physical and mental abuse. She had been held up against a wall, pushed, and shoved around for the last time. Then, after years of being told that she was worthless, fat, ugly, pathetic and everything in between she sought refuge in pursuing her dream of working in fashion and entertainment.

“All storms are temporary in life, it’s not about how you survive through a storm but rather what you do with your life after a storm. I started my production company Redemption Images to inspire and encourage those that have been silenced by abuse. I want to be the voice for the unheard and tell the stories we often do not hear about including social issues that are currently destroying our society.”

Faith would have it that the brave and ambitious CEO would make major strides on her way to the top of Hollywood’s biggest hill. Having worked with stars like James Worthy and Big Gipp of legendary Hip-Hop group Goodie Mob, Ink Drippin of VH1’s Black Ink Compton, OG of VH1’s Basketball Wives, and Eric Nelsen from the hit TV show 1883, Ward is no stranger to success.

Ward sat down with Sheen to share how she transformed her pain into power, her journey to CEO of Redemption Images, and how being Billie Holiday’s great-niece impacted her career.

Tell us about your journey into film and your move from LA to Atlanta?

I got into tv and film a few years ago after I discovered my relation to Jazz musician Billie Holiday. It was at that moment that I wanted to ensure her life story was told the right way and with the untold truth. Filmmaking is an impactful and powerful source of redemption in the lives of victims when true stories inspired by real-life events are told. I went from being homeless and abused to now directing and writing films. My story continues to inspire countless victims of domestic violence. I feel like instead of me finding my purpose, my purpose found me. In a sense, I wanted to be that hero that I never had but never knew existed within me. Since then I’ve toured the world with Mercedes Benz fashion week, acted in Netflix films, told my story on The Steve Harvey Show, and have directed and written my very own Award-winning films. I relocated to Atlanta in 2021 and I’m focused on growing and expanding the production company while being a great example to those that look up to me.

What is your message to domestic abuse victims?

Find your strength, re-invent and re-create yourself in a better way. 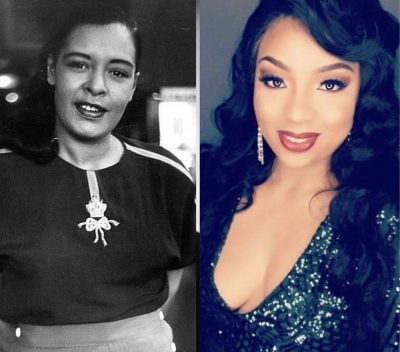 How has being the great-niece of Billie Holiday shaped you?

At first, it was so shocking because my family literally held on to that secret for many years, I used to wonder why I resembled her. As I began reading her journal, I found that she and I had a few similarities in life – a love for fashion and entertainment and undeniable strength. She experienced domestic violence as well but still went on to make major contributions in the music industry. Knowing this was both empowering and inspirational. In moments when I felt like giving up, I could literally feel the strength that came from our bloodline running through my veins.  It’s great but also challenging to live up to such an amazing legacy or at least keeping her legacy alive. I vowed I would tell her life story the right way – the way she wrote it out before she passed. Legacies are a very precious part of history that must be protected especially for the next generation.

Tell us about your latest/new project?