Award-winning Violinst, Mapy Details Her Grammy Awards Experience with DaBaby & Being Unapologetically Herself In Order to Chase Her Dreams

Mapy, popularly known as The Violin Queen stole the show at the 2021 Grammy Awards when she performed alongside DaBaby recently. After moving from Paris to America to follow her dream, she has stunned the world with her authentic personality and drive to pursue her dreams. We recently sat down with Mapy to discuss her showstopping performance, an upcoming fashion line, and obtain details on what we can expect to see from her within the next few months.

Tell us about your experience performing at the 2021 Grammy Awards.

Performing at the Grammy Awards was a dream come true and something I really never thought would happen one day. It was something that was on my manifesting list and I’m so surprised that it happened so fast. This was one of the greatest experiences of my life, to be honest. It’s crazy to me how it happened. Last year was very difficult for artists during the pandemic. It was difficult to figure out things because shows were cancelled. I’m from France but I live in the US, so I feel like I have to show up at work ten times harder than everyone else. To help me mentally, I posted a lot of covers on social media to spread good vibes, good music, and love to my followers on social media. In the summer, one of my favorite songs was “Rockstar” by DaBaby. I played the song and posted on social media and it went viral. DaBaby saw the video, and this is what changed everything. He reached out to me with an idea for me to perform with him at the Grammys. It was unbelievable, especially after a long 2020, not being able to perform. I was going to be on the Grammys stage with DaBaby and many popular artists! That performance was amazing, especially the fact that I was on stage with DaBaby, Roddy Rich, Anthony Hamilton, the whole team was incredible. I really wasn’t even stressed being on stage; I wasn’t anxious, I felt so good, I felt happy, and it felt like I belonged. I can’t even explain that feeling. I realized that this was something that I really wanted to do forever. I’m grateful for this opportunity, DaBaby really allowed me to be there. That was his vision, he created an amazing version of “Rockstar” including the violin and I am really thankful for that. Not only the violin but including me as an artist in his performance. I’m still very emotional now, talking about it.

You decided one day to quit your job and fully commit yourself to making your dream come true. How did you find the courage to go after your dream?

For you to understand, I need to start from the beginning. I graduated from school and after that I thought I would become a professional violinist and it didn’t happen. I just felt like I failed. I really thought that just because I had a degree, I could become a violinist, and it could be my job. France is really traditional when it comes to classical music such as the violin. If I’m playing the violin but a different genre, it is not really welcomed. I had a different look; I didn’t look like any other violinist in France at the time. I didn’t get gigs like other people. Same degree as these artists, same experiences, however I would not be booked. Sometimes I was called to work on television shows behind international artists, I thought I was amazing, but they would tell me they were looking for a Black violinist in the background for the main artist to “look cool.” That was very confusing to me. At that time, I had to accept it because it was a job. I began to feel like it wasn’t right. Why was I booked only to make these people look cool? Women violinist would be white, with straight hair, and green eyes. That was the look they were going for. I wasn’t like that. I finally decided to give up because I could not pay my bills like that. I wasn’t booked enough. I had to accept the fact that I failed as a violinist. I got a 9-5 job, working in a store, a law office, an international company, and even in construction. I stopped playing the violin completely and I began to feel depressed. Everyday I would wake up, I felt like a failure. I always wanted to become a hip-hop violinist but this would not happen because this world was not made for me, maybe? My life started to suffer, even my relationships. I was in a bad place mentally. One day I was sitting in my living room and I was thinking, I failed twice, as a violinist and as a 9-5 employee, I felt like my life was a failure. This year, I don’t know what miracle happened. This is the exact moment where I decided to quit my job. Life is too short not to try to follow your dreams. I decided to give myself another chance to become who I’ve always wanted to be. I quit my job, picked up my violin, and played the music that I like. I feel like the universe always helps you when you need it the most. Two weeks later, I got a call from a friend who asked if I was still playing the violin. I performed music that I wanted to play at this event, just the way I was. I got a lot of bookings because I realized that a lot of people liked what I was doing, I was just in the wrong place. I started to become more confident and followed my dreams. I decided to read more books about personal development, and this really helped me become who I wanted to be. It ultimately led me to the United States. 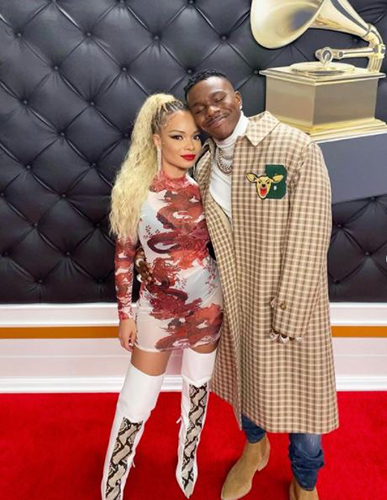 Tell us about your fashion line and what inspired it.

I’m really excited about this line. When I was trying to become a professional violinist, I was really judged by the way I was dressed. A lot of people would say that I was not dressed as a classical violinist, but I was just being myself. In this island, we love being cute, dressing, makeup, and embracing our feminine energy. This is how I was raised, who I am, and I’ve always wanted to be myself. That was the only way for me to be happy. Once I started to post more on social media and started listening to people who didn’t even know me and my culture, everything changed, my life changed. I felt like I was finally able to be unapologetically myself. The moment has finally come where I can create because I’m also participating in designing the new collection. This is really great for me because I’m creating designs that look like me. I’m very happy and excited about it because it will look and feel like me. This collection is the reflection of the freedom that I finally have now. 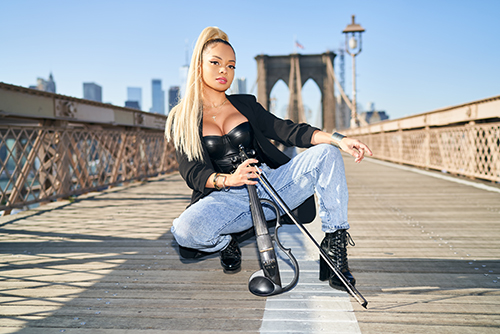 I’m currently working on my album. I’m recording music and will be releasing music in a few weeks. I’m recording my original music and I am super excited. We also have the fashion line coming and more shows when the world opens up again. 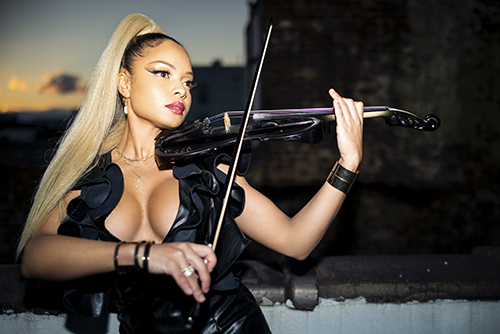