Nearly 18 years ago, Bella Grace was pronounced dead. The father of her children and ex-boyfriend stabbed her 13 times in an effort to take her life away. With God, Bella survived and made it her mission to share her story with others. With Domestic Violence Awareness month quickly approaching, we wanted to catch up with Bella to discuss her experience and why she is so dedicated to helping survivors along the way.

My name is Bella Grace and if I had to sum up who I am with one word, I would use the word: teacher. I love to teach people and make sure they have a clear understanding of what it is that they need to know. I was born and raised in Newark, NJ. I was raised in a single parent home by my mother. My father died when I was 2 years old leaving my mother to care for me and my older brother. Since I was young, I have always loved to care for others and I have always loved children. I have always been involved in my community. From boxing food for those who were in need of food, to teaching older people how to read; my focus has always been to help people. I attended Arts High School in Newark, NJ and after graduating high school I went on to attend Pace University for 6 months. I couldn’t afford to continue to attend and so I had to leave. The truth behind that is that I already knew who I wanted to be and what I wanted to do; God was actually leading me out of this “tradition” to trust him: but I didn’t know this. So instead I returned home to New Jersey and met a guy. I didn’t want to talk to him but went against my own will. I didn’t want it to seem as if I was “judging him” or not giving him a chance. I learned a valuable lesson from that: Obey your inner spirit no matter what.

Can you share with us what happened that changed your life when you were 18?

I became pregnant at 19 and had my first son at the age of 20 years old. Before his birth, I started to see why I shouldn’t have talked to this guy, let alone get in a relationship with him. I wanted out, but he wouldn’t let me go. I didn’t believe I could walk away like that because he would always find me and come after me, so I stayed. His insecurities mixed with my insecurities only made things more complicated for the both of us but still neither one of us was willing to walk away. From taking me on the Garden State Parkway driving his car well over the number on the dash (no lie), he teased me by steering the car over into the far right lane as if he was going to crash the car into the wall, to dragging me by my hair out of my supposed to be “best friend’s” house at the time whom was also his cousin with a machete to my neck; I finally made a decision that I wanted out. I was tired of everything including living. I attempted multiple times to take my life. But yet, every attempt was unsuccessful. Things became so bad that even when I moved on it looked as if I didn’t. I started seeing someone else and this guy just didn’t take no for an answer. The irony of it all was that he was the one who broke up with me and was with multiple other girls, but refused to let me go. Things became worse and caused me to end up in the hospital for one week after having an abortion because he raped me. I lost so much blood afterwards they had to give me an emergency blood transfusion. This was August 14, 2002 at St. Barnabas Hospital in Livingston, NJ. One month later, my thoughts would become my reality. He had moved in with me because he claimed his parents had put him out and he had nowhere to go and wanted to be able to see our two children. Instead of telling him no, I told him to ask my mother. I had made up in my mind that it should be no issue because he had moved on and so did I. All Lies! He continued to follow me and stalk me and threaten me. Nothing I gave in to for him made him rest. He moved out without ever saying anything to me or my mother and I was happy about that. And then it went down on Saturday, September 14, 2002; one month after I had received the blood transfusion. I called him to come and pick up a small box from the apartment and he took all morning before he finally came. I was getting my sons together so we could go to Chuck E. Cheese’s and had them in the kitchen eating and now waiting for me to get myself together. I was wearing a white tank top and purple and blue checkered shorts. I was running my bath water and talking on the phone when something on the inside of me told me to go to the window. When I looked outside of the window, I saw him along with a crew of people. I made a comment to the person on the phone saying, “Why did ‘so and so’ pull up like he’s the A-Team?” I had no idea what was getting ready to happen, but those words I spoke were the introduction to what was to take place.

I went downstairs, opened the door, he pushed passed me and went upstairs. I laughed it off and went upstairs after he was already in the apartment. When I entered the apartment, he was coming out of one of the bedrooms. I told him that he had nothing in there and that his box was at the door. The people he came with came upstairs also. He told them to take the box and go downstairs. He kept insisting I had people following him and that’s how we started going back and forth exchanging words. Our two boys were still in the kitchen; one was sitting at the table and the other in his infant car seat; they were 3 years old and 11 months at the time. My back was against the kitchen counter by the sink and he was facing me when he said, “No one will ever want you” and punched me smack in the middle of my nose. All I remember was the flash from the punch and the sounds of my children crying and screaming as I hit the floor. When my eyes opened I realized I couldn’t move. I was laying on my back and could see blood all over the floor. I managed to slither across the kitchen floor and pull on a 25 foot blue trimline phone cord and dial out. I called my brother first, then the person I was in a relationship with at the time, and finally 911. I didn’t even complete my words to the 911 operator and I passed out. The next time my eyes opened the EMT workers were in the apartment. Their faces told the whole story. They asked me who did this and I told them who I believed did it. Yet, again before I could complete the statement, a gush of blood shot out of my chest, landed on the female EMT worker and I passed out. I woke up in UMDNJ Hospital located in Newark, NJ. My body had sustained a collapsed lung, spinal damage, total nerve damage on my entire left side, a black eye and broken nose as well. He had just missed my heart. Thirteen stab wounds to my left chest and two to the back of my neck. I had to have a chest tube in me for sometime and have the wound to prove it.

Trial took forever. He was on the run and my life became even harder to live physically with what occurred. I had to learn how to walk again and use my fingers. My balance to date is still off at times and I still suffer with spinal spasms and muscle spasms. I also have multiple herniated disks as well. In the end, he served his time for an incident involving a cop when he kidnapped our son and was deported right after. I received nothing from the state or his family. 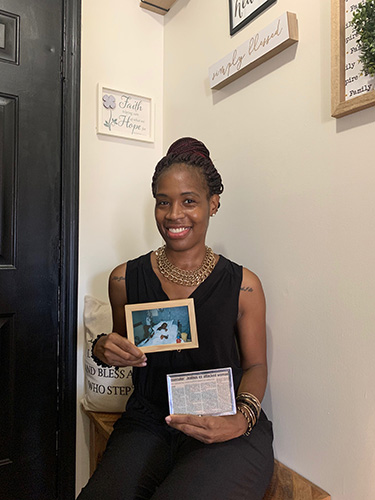 What helped guide you through this difficult time in your life?

God gave me a new life. Although I have been denied by disability multiple times, God still has provided for me and my children and through all of this I learned to depend and trust in God with my whole being.

Throughout this entire ordeal, God has been my help. He’s given me a peace that surpasses all understanding. I forgave him and all of the antics I endured by knowing him. I even went to the jail he was being housed in originally to ask him what happened. Upon me leaving, I let him know it was okay and that I forgave him. A lot of people had an issue with that. How could I forgive him they wondered. But, how could I not? In me forgiving him God restored unto me more than I could have ever imagined.

Why is Domestic Violence Awareness Month so important to you?

The things that I didn’t know, I vowed to teach other women and young girls as well as men and young boys. Learning who you are, learning why you accept the things you accept, learning how to forgive, and so much more. Has it been easy? Not with man. But through it all God has been leading me in the way I need to go to get this word out and I know that God has been using me to be a blessing to so many around the world literally by teaching them by telling them my story. It is my mission to wake up as many people as I can to break free from these chains of oppression and bondage. I also am determined to help single mothers know their worth and value because they are more than single mothers and they need to know that; and it is my purpose to teach them that.

My name is Bella Grace and I teach single mothers that they are more than just a mommy and how to be who God created them to be.

All images courtesy of Bella Grace