If you’ve ever wondered what it takes to be successful entrepreneur, you need to hear the story of Tyrus Rashod. Brown, a millionaire serial entrepreneur and author.

Brown, one of five children, was raised in a single parent household in Memphis, Tennessee. His family struggled for food and Brown remembers fearing being evicted.

That fear stayed with him as an adult. But it did not leave him feeling wounded or wronged.

“Not knowing where our next meal would come from,” he remembered, “or where I [would] lay my head the next day… truly molded me into a businessman.”

He left home at 14-years-old and eventually became homeless. While he continued attending school, he was ultimately kicked out of high school his senior year. But he didn’t let that stop him.

“The key to being successful is working hard and never giving up,” he said. He later received his GED and would go on to receive three college degrees.

Watching how his mother struggled, Brown was determined not to experience a similar fate. He read self-help and financial books, which helped him understand the world around him.

He dropped out of medical school to get his real estate license and has gone on to make a name for himself as a real estate investor and serial entrepreneur.

He owns commercial and rental properties, has over nine storefronts and businesses, sells stocks, and has published three books.

“Entrepreneurship is very challenging,” he admits. “What’s kept me going through the tough days were my goals and my mother.”

Indeed, his hard work and dedication have paid off. Brown became a millionaire at just 26 years old and is on track to amass $2.9 million in assets and capital.

He went from sleeping on concrete to transforming himself into a self-made millionaire. 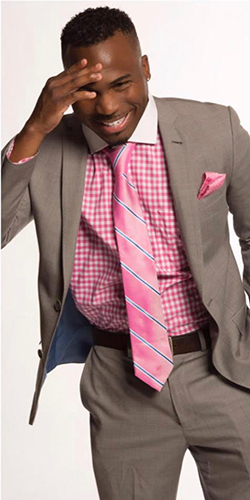 Purchase his book, “The Game Untold” on Amazon.

All images Courtesy of Tyrus Brown