‘BIGGER’ Star, Tristen J. Winger on What You Can Expect to See on Season Two of the Hit Series

After making his television debut on Issa Rae’s HBO Original Series, Insecure, many of us have not been able to get actor, Tristen J. Winger off our minds. Today, we see him on the popular BET+ series, BIGGER, where the multi-creative talent portrays the fan-favorite character, Vince. We recently sat down with Winger to discuss everything from his experience filming the series’ second season during the ongoing pandemic, upcoming projects, and much more!

Tell us about your experience so far on the hit series, BIGGER.

My experience so far has been amazing. Season one we filmed in 2019. This was one of the first shows that BET+ created as an original series on their platform. It was a great opportunity for us to treat something special that was for the most part unfiltered that the BET audience hadn’t seen before. This is a premium network with the digital space for BET so, we got to do things that folks weren’t expecting like male frontal nudity on multiple episodes for the series (laughs). We spoke the way Black people talk and communicate with one another. The characters got to have these conversations together that isn’t really displayed on a large scale besides other premium shows. I was happy to have this experience with BET. For the second season, we continued with the special formula, with the addition of COVID. Our original production date got pushed back by about four months. We were supposed to begin production in April, we didn’t start until September. Fortunately, things loosened up, the strategy was formed, health and safety was on point the entire time we filmed in Atlanta. My cast mates and I tested three times a week. There was always hand sanitizer being distributed but as far as the actual production of filming the show, we were just in a better space. I know for myself I felt a lot more comfortable in my space and character. With this season specifically, we got to use some of my own personal story for Vince’s character. I loved being able to do that and I am happy that the response has been so great.

With the series big return just last week, what can viewers expect to see this season?

I can say that you’ll see some of the same issues from the first season. We have to pick up where we left off with that cliff hanger. I mean, it is set in the world of the pandemic as it exists in Atlanta. Everyone is trying to get to that next place. A lot of the characters were left with what’s going to happen next after the big arrest in the last season. With Layne, Deon, and Greg – there was some beef at the end of the season. There has to be a resolution to that. There was resolution in the second season. Vince went from being this struggling DJ, working in the strip club – doing the day shift, when no one was showing up. He was barely getting tips, it was terrible, and it got to the point where by the end of the first season, he gained more publicity and more money as a result of DJing bar mitzvahs. That continues in the second season where we see Vince doing bigger and better things. He got a new haircut, better jewelry, out of his clothes, and in his comfort zone. It’s great so with Veronica, we saw that she had issues with her comfort level, where she was in her job but still being a boss. She was missing out on that romance with Deon. Deon struggled at work, not feeling appreciated. He eventually quits and has to figure it out in the second season. Its looking up for Deon. With Layne, we saw her huge struggle in her love life. She has a love square. This is a continuation of life. It’s not necessarily the next chapter of life but almost like the next paragraph – a continuation of what we saw in the first season. So far folks are loving it. I have watched the season twice, I’m going to continue to watch it some more because I love our show.

How has it been for you personally as a creative during COVID-19?

It feels like I have been in different stages. When it was first announced back in March that we were going into this lockdown, it felt surreal. It felt like it wasn’t going to last that long; I thought it would be a few days. A month later, I thought maybe after we stayed inside, the government will get ahold of things and everything will be fine. Three months later, I realized this wasn’t going anywhere. We’re going into summer and the death tolls were going up. It was insane! For myself, personally, I found things to do because I was supposed to be filming. I bought a bike so I could go on bike rides by myself, I became a plant dad, and I produced music again in my home. I just wanted to create different outlets to keep myself sane and occupied while the world around me was growing at a rapid pace. It was very unknown. I thought everything was okay with me, but I began having conversations with my therapists and I realized there was some things I didn’t notice about myself that were changing because of our circumstances. We can’t experience the world we were used to experiencing. We can’t go on vacation, go on flights like we used to, or socialize with our friends and family the way we used to. Social distancing was really embodied, that’s what we were doing. We’re distanced, pushed part from our friends, family, and loved ones. It was tough but we were able to create new means to communicate and to have community in this pandemic. Zoom became extremely popular, I FaceTime way more than I did before. Even professionally, auditions became virtual. We have to be creative from home and be able to connect with friends and our fellow actors while coaching ourselves and be better at our craft. It made us more creative with the time we had and appreciate the time we have with other people and ourselves more than ever.

I am working on my own stories; I think it’s very important. We saw last year that there was a lot of important stories from the death that occurred that sparked marches all over the world for Black Lives Matter and Stop Asian Hate. It’s important for us to tell our stories. We saw a lot of activism. My activism is going to be in storytelling. I believe that the best stories to tell are the stories that we already know. The story that I know best is my own story. I’m working on telling my story as a kid, who was raised by a single mother – who was one of the best teachers in the Los Angeles school district. I want to tell my story and what it’s been like to have a mother, who is an overachiever, who expects that same overachieving greatness of her two boys; and what that looks like for me as someone who graduated from high school early and went to college younger than everyone else. That’s the story I am working on, I would love to tell my mother’s story. She was a ballroom dancer who toured when she was in college. She had me, her first son, so I want to tell her story from inside out. Start with me and go into my mother, maybe go to her mother as well. I want to tell the story of my family, that will be our legacy. Hopefully that will inspire other people to tell their stories and their experiences. That will be sort of the portrait of our families. 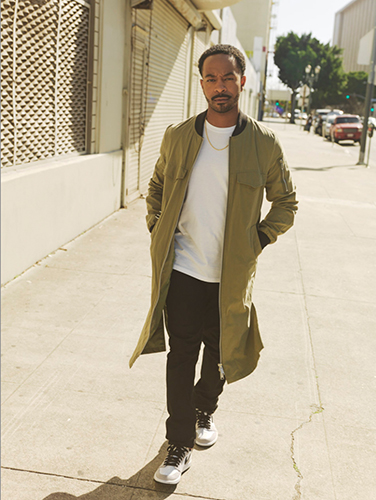