“I didn’t fall in love, I rose in it”– The Great Toni Morrison.

February, a month to celebrate both love and black history… What better way to celebrate than with a look at love through the lense of those rising in love, the soon to be, the newlyweds, the passionate lovers, teachers and doctors of love. Take notes as we navigate through some of the most beautiful black love stories in celebration of February.

The Engaged: Brittney and Ervin Davis

This love story began on Fairgreen Lane, in Houston Texas back in 2014. When Ervin and Brittney met thought, they were simply doing their friends a favor by just taking one for the team- you know the friendly third wheel? As conversation grew on Ervin’s porch that day it felt like an instant connection. Neither one of them were shy so the conversation just flowed. Ervin’s mom came home from work & suggested he take Brittney inside because it was cold. Mama know best, she knew Brittney would be her forever daughter in law before he did. They talked as if they had been friends for a long time, outside of Ervin flirting the entire time. Immediately after leaving Brittney spoke into existence that he would be her husband. Her friend though she was crazy because they had only known each other for about 2 hours. Brittney planned to call him 3 days later, because she needed to act as If she wasn’t already head over heels. That only lasted about 15 minutes. Ervin couldn’t resist and he had already called her before they made it to the highway. It was at that very moment she knew. Now here they are just a few months away from becoming the Davis’s. Their journey has been a complete experience. They’ve grown strong in so many ways and have shared many of their first times together. May. 2021 they will be sharing their big day with all of their close friends and family! 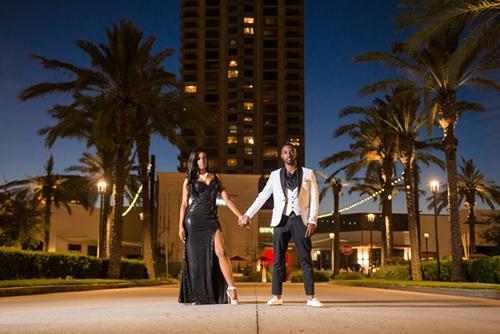 Their advice to newly engaged couples:

Make time together a priority.

Budget for a consistent date night even if it’s a night in.

Time is the currency of relationships, so consistently invest time into your partner and relationship.

The Newlyweds: The Fowlers 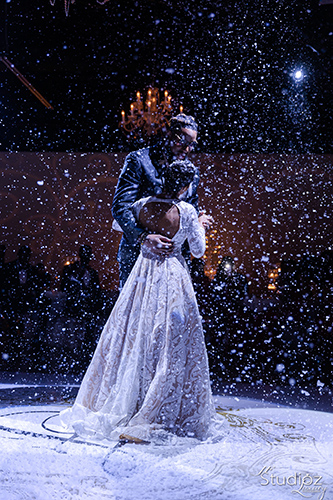 It’s not the usual love story, but one that is very extraordinary. It wasn’t love at first sight, the two had recently got out of long relationships prior to crossing paths on Instagram, where they met. Diamond lived in Houston, Texas and Cornelius lived in Tampa, Florida. In 2016, Diamond went to a Single’s Conference in Houston with some friends. She was tagged in a photo on a mutual friend Instagram who Cornelius was following. Eventually, Cornelius sent Diamond a friend request and slid in her Instagram DM’s. As inquisitive as Diamond are, she decided to find Cornelius on all social media platforms and figure out who he was. Diamond planned on friend-zoning Cornelius because she figured he was in a different state and things, possibly, could not work. However, Cornelius had something else in mind. The two got to know each other for eight months before he flew to Houston to meet Diamond and take her on a date. During that time, prayed collectively and individually on whether they should take the next step to date. The two wanted to ensure that they were dating with purpose and not a distraction. Prior to Cornelius leaving Houston, he asked her parents, brothers, and pastor to date her. He was given the green light! So, he sent her several gifts on Valentine’s Day asking her out. During their courtship, the couple traveled every other month to visit one another and made sure they remained intentional. The two learned that gifts were their love language, so Cornelius sent her flowers bi-monthly and Diamond had random surprises. It wasn’t just the two charming personalities that drew them but their hearts for God, and love for people. The more they talked and open up to each other about how imperfectly perfect they were, they felled more in love. Of course, being hundreds of miles apart wasn’t stopping them.

Summer of 2018, Cornelius flew to Houston and asked the same individuals, if he could have Diamond’s hand in marriage. Of course, everyone state, yes, again but this time with more heart-to-heart conversation! However, months prior to Cornelius proposal to Diamond, his father passed. It was the best of times and worst of times all at once. But with his father’s blessing prior to his passing, on November 24, 2018, CJ proposed to Diamond on the beach in Clearwater, Florida where the two believed Cornelius’ father was spiritually present.

The two was engaged for 2 years prior to saying” I Do” and joined hands in marriage on January 8, 2021 in Houston, Texas with a winter wonderland theme. Their relationship was far from easy but unique. The couple faced many obstacles but was determined to put in the work to ensure it lasts! Each year together their relationship gets more beautiful, friendship deepens, heart seems to grow bigger and they love each other more. Ahh, true love exists, one has to be open and willing to get out of their comfort zone because God has already written it! Love was not made to be ordinary! 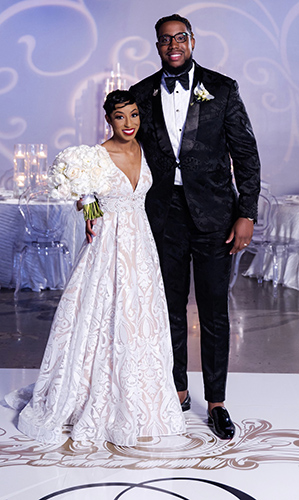 One word advice to newlyweds:

The Passionate Lovers: Tiffany and Jameetri Washington owners of Washington Agency of AIL 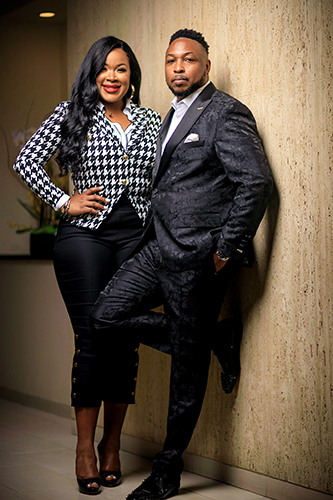 Tiffany: “Someone once asked us what the secret is to a successful marriage. My answer still remains the same; never tell your wife what your dad always said. Jay’s dad always said, “Son if you want to be happy, learn to be wrong”. I normally remind him of this whenever I am wrong. (Ha!)”

Jameetri: “It’s our way of reminding each other that our love is bigger than anything we can ever encounter.

I remember the day we met. Beautiful, elegant and with a little attitude. I was doing interviews at work, came out the back office to the front lobby, and when she saw me, she was awestruck. Love at first sight! I know she will tell you that’s not the case, but it makes me feel better to tell it this way. Sitting across from her at the conference table in my boss’s office and there was just a kinetic attraction. I could not stop smiling and as she spoke it seemed like the world began to move in slow motion. I actually truly asked God to bless me with an awesome wife and at that moment I realized that he had just walked her right into my office. I didn’t realize I was lost, until I was found. She has that kind of love that just makes you want to be a better man and husband for her.  Seven years later, our advice to any couple would be that the real key to a successful relationship is to keep God at the foundation, always be considerate of each other, and grow inseparable from there.” 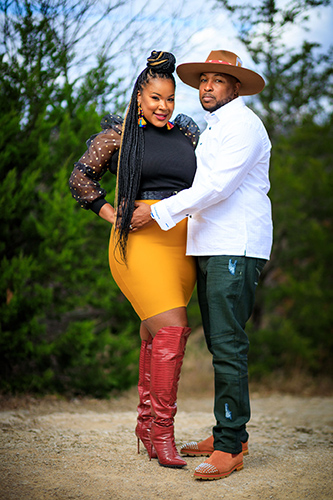 Their advice to married couples:

The real key to a successful relationship is to keep God at the foundation and center of it all. For married couples, we would also include that communication is the key to unlock your growth while enduring difficult times and most importantly, always be considerate of each other. 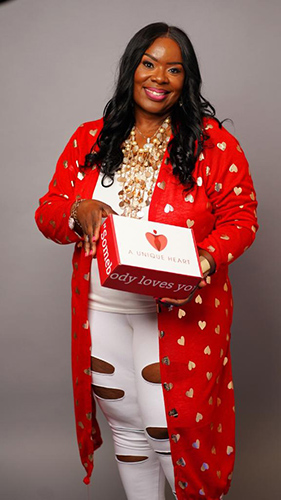 Ivan and Benita Ledet met over 30 years ago; However, they were not the average high school sweetheart love story.

A love lost and reunited, after a few years of dating the two decided to part ways years later as destiny had it, their paths crossed again.   After a few dates filled with conversation and long hard talks about the hard things, you know the things that help each other learn and understand the true language of love the two were inseparable.

Benita Ledet, award winning author and Founder of “Love In A Box” shares her side of their black love story “We have now been married for 22 years; our kids have bonded.  We have a precious blended family of 4 kids and 4 grandchildren.   It wasn’t easy in the beginning stages of our marriage because blended families do not always survive the ups and downs.  But I knew in my heart of hearts that we loved each other, and we were soul mates.  God knew we were meant to be together; it was all about the right timing and God’s time. We give God all the glory. He has truly blessed our lives in so many ways we could have never imagined. We still talk about the first day we met and that it feels like a dream sometimes because it really is a unique love story. “

Now pillars and philanthropic in the Houston community the Ledets make it their mission to not only be a power couple, but to help serve and teach other couples the power of Love. 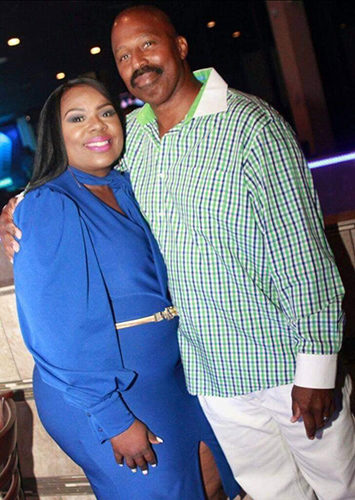 Their advice for longevity:

When you and your spouse really know what love is and when love or your marriage is worth fighting for, you will not let anyone, and anything tear you apart.  Love Always Wins!!!

If you would like to have a love consultation with the love doctor Benita Ledet, click here.

“There is nothing in nature like it. Not in robins or bison or in the banging tails of your hunting dogs and not in blossoms or suckling foal. Love is divine only and difficult always. If you think it is easy you are a fool. If you think it is natural you are blind. It is a learned application without reason or motive except that it is God.”- Toni Morrison, Paradise