With May being Asian Pacific American Heritage Month (APAHM), one artist remains on our radar: CaliStar. The rising pop artist is a daughter of Taiwanese immigrants, using her music and platform to break barriers for Asian American artists — while taking a stance and standing up for her people. CaliStar has been vocal in supporting causes close to her heart such as anti-bullying and mental health awareness.

Now, she unveils her newest single and visual called “Don’t Give Up,” an empowering record that reminds audiences to never give up the fight. With the recent rise in anti-Asian violence, CaliStar felt the need and importance to share who she is as an Asian American, reminding audiences around the world that they are human just like them.

Directed by Ron Yuan (Blade of the 47 Ronin), the music video brings together fellow AAPI members and allies to unite for a greater cause, standing and uplifting one another any chance they can.

Sheen Magazine caught up with CaliStar to discuss what this new release means to her.

What’s your reason for pursuing a career as a singer-songwriter and as an activist?

My childhood dream was to become both a singer and a lawyer, and I grew up in a household that modeled for me how to support people, organizations, and causes. I became a singer-songwriter after being a management consultant and an international aid volunteer, but I turned down a deal in music to start law school because I felt that it wasn’t right at the time. As a lawyer, I’ve been able to support Asian Americans in entertainment, as well as a number of nonprofit organizations and causes that have been important to me.

In March 2020, I participated in the first #HateIsAVirus social media campaign to stand against and bring awareness to the anti-Asian sentiment surrounding Covid-19. The rise in anti-Asian violence really highlighted to me the importance of sharing who we are as Asian Americans through our art and culture so that people can see us as humans and understand us as people, and I felt led to do more to help break down barriers that exist for Asian Americans in music.

I left the law firm, started singing/songwriting as the artist CaliStar, and started Cali Star Entertainment to inspire others to pursue possibility. I also joined the Hate Is A Virus team as their General Counsel and joined the board of Asian Americans Advancing Justice – LA. I do all of this to help my community, to create beauty with my art, and to hopefully inspire others to pursue their dreams.

What’re you most looking forward to with the release of “Don’t Give Up”?

So many amazing people came together to share their talents for this project, and I’m so excited we finally get to show everyone what we’ve been working on. The storyline of the music video shows a glimpse, from one storytelling perspective, into what it may have been like to be part of the Asian American Pacific Islander (AAPI) community during the rise of anti-Asian violence the past few years. It also hints at the formation of Main Street Patrol, which is a nonprofit organization started by Teresa Ting, who’s a talented actress featured in the music video.

I have a background in supporting nonprofit organizations centered around helping the AAPI community, including Asian Americans Advancing Justice – LA and Hate Is A Virus, and the music video includes footage of Teresa and I speaking at and marching in a rally hosted by Main Street Patrol. In addition to revealing more about me, the music video reveals more about others in the AAPI community and the strength that comes from uniting, standing together, and uplifting others. 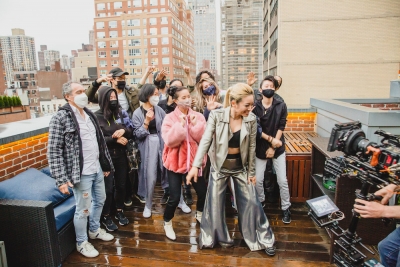 What inspired you to write the song “Don’t Give Up”?

I wanted to write a song that would capture the essence of my heart and life message. I often think about legacy and the impact that I’d like to leave with my time here on earth, and when I took some time to really think about the core of who I am and what my life represents, this song came out of me. “Don’t Give Up” is a song about the dreams that are buried within. It’s about finding the strength inside to be vulnerable about your fears and taking the steps to overcome them. This song is about looking within and finding the boldness to step into the most authentic versions of ourselves, even if we feel like we don’t deserve to or we don’t know how or we don’t have all the answers. This song is a purified, concentrated reflection of me, which is the result of my life journey.

We noticed footage in the music video from a #HATEISAVIRUS rally, and saw members of your community holding #POCUnite signs. Why do you believe it’s important for movements like #StopAsianHate and #BlackLivesMatter to support each other?

Unity is so important, especially authentic, non-performative unity, which isn’t easy to attain and will take a lot of effort to fight for. How can we expect support from other communities if we don’t also support them? How can we know what the best way to support a community is if we don’t try to form genuine connections and approach from a position of learning and empathy? There are so many things in this world that cause division, even within our own communities, and sometimes the cost of that division is massive.

If we can look outside of ourselves and our own needs to see how we can support others, we can all come out stronger. I know that I have really appreciated outreach from allies when anti-Asian violence was rising. When I didn’t understand what was happening and didn’t feel safe as an Asian American female, it made me feel so cared for when other people reached out with a simple check-in and reinforced to me the power of humanity and love. I’m still learning every day, and that part of that learning is also learning about other communities and what it looks like to live life in their shoes and see the world through their eyes. If we can really see the people around us, maybe it’ll help to make the world better, or at least more beautiful in some way. That’s the driving force behind this song and video, and we wanted to highlight that in the video in a visible way.

Tell us about the making of the “Don’t Give Up” music video.

The music video concept was initially thought of by the director Ron Yuan, who’s a very talented actor, director, and also a friend. After he listened to the song, he approached me with the idea and asked if I’d be willing to use the song to highlight the rise in anti-Asian violence and the responses of our community. He told me about Teresa Ting, an actress who started Main Street Patrol in Flushing, Queens to help protect the elderly and escort them home. We ended up involving so many amazing actors, stunt people, makeup artists, community members, and crew members.

You’ll probably see some cameos. We have scenes that involved a real rally and march in Flushing, Queens. We involved real community members from multiple generations from Manhattan Chinatown as well. The local businesses supported us by feeding us and taking care of us during production. So many people came together that it felt like we were all creating something beautiful together to help get our message of love and unity out to the entire world. It really took an entire army, and we hope that everyone sees the heart we put into the video. 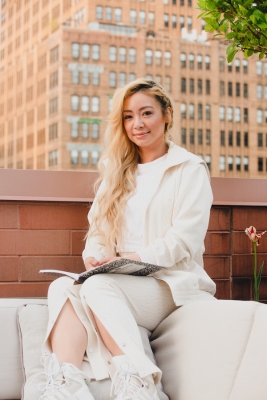 I feel like “Asian American” is so diverse, and we’re still learning more about the communities and culture within our larger community. I can’t speak for everyone, but a lot of us have been processing what it means to be Asian American Pacific Islander, and many of us are learning how to come together and what that looks like. Many of us are also learning how to use our voices, individually and collectively, and it’s a time of immense growth for us.

At the same time, however, there are a lot of intergenerational layers being processed. There are things like the model minority myth, the perpetual foreigner myth, the bamboo ceiling, and other systems that are being unpacked. People are taking the time to understand who they are and where they come from, and that’s beautiful. More and more people are being activated to find value in themselves and to rise up for the community in different ways, and I love that.

How can one be an Asian-American ally in these times?

I know that for me, I’ve been very impacted when others have reached out to me just to check in. Something like that can be so helpful on a personal level. I’ve also had many conversations just to brainstorm ways that allies could help, and there are so many different ways. Even listening to this song, watching the music video, and sharing it can be helpful. Genuine conversations matter. From there, there are so many possibilities, including speaking up for a friend, sharing about a nonprofit, donating to a cause, referring someone for a position, speaking up when you feel led to, championing for access within a workplace, and many more. All of these things can make a huge difference.