Are you ready because NBC’s Titan Games returns tonight! Field reporter, Cari Champion recently sat down to dish on the exciting new season of the hit television show. In our exclusive interview with Champion, she discussed her experience returning as commentator on the athletic competition show, what made her want to become an anchor in the first place, and much more!

How has your overall experience been serving as commentator for NBC’s The Titan Games?

The overall experience as commentator on The Titan Games was amazing. It was one of those opportunities where you get to work with the biggest stars in the world, his name is Dwayne “The Rock” Johnson. You get to see him up close and personal and learn from his professional. At the same time, you get to see him on a human level – he’s just a great person. My co-hosts were great. We had such a great time interacting with the contestants. This season really focuses on human stories, the humanity of it all. We’re rooting for people we don’t necessarily know but want them to win at life, in the arena, and in competition. It’s a perfect time for us to have this type of show come out, especially during the pandemic. We filmed before the pandemic. We all need some good shows, inspiration, and definitely some sports in our lives so this is great. 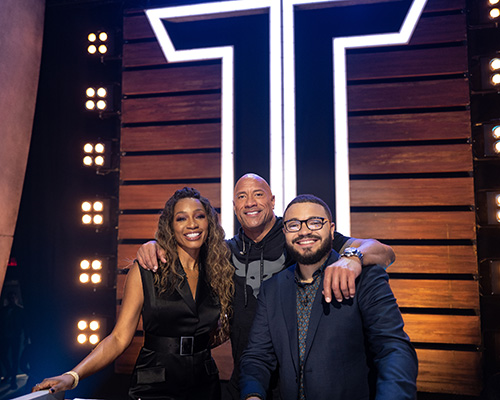 You’ve always worked as a sideline reporter for ABC’s Battle of the Network Stars. How was that experience for you?

That was a totally different type of interaction, but it was fun! As you know, I’m a broadcast sports journalist so when I have the opportunity to step out of the lane that has defined me for so long, it’s usually allowing me to be more creative. That was such a creative experience. You’re told to commentate on sports that aren’t traditional sports. I find it exciting. That was a great experience. For me, this show allowed me to meet my childhood idols. It was fun! It’s the same for The Titan Games, you get to meet people you’ve always watched and admired. Truth of the matter is, the human interaction drives me in a way that I didn’t know. Now we’re isolated during this pandemic where there isn’t much human interaction. It’s always a good opportunity to go out there and meet different people and have different experiences.

What was it that intrigued you about being an anchor that made you want to make it a career?

I felt like when I was a kid, I always liked the idea of being able to tell stories. I think the media is extremely powerful. There is an opportunity that will tell a story that wouldn’t otherwise be told unless you were able to see it through a different lens or perspective. I think as a kid, I always liked telling stories, but I liked telling those stories that weren’t told mainstream. At the end of the day, that’s really what you do in a form of media. When you’re allowed to tell stories and you remember to focus on that, that’s the beautiful thing.

Tell us about your podcast, Be Honest with Cari Champion.

It’s based on the idea that everyone always has something to share that they don’t want to share. Especially in the public eye, you take bits and pieces of what you want to share and what you don’t want to share. You give it how you want to give it. Everyday people don’t want to share their secrets or stories. I was trying to figure out how I would go about being honest with myself and who I interact with daily, that’s where the title comes from. The podcast is just to have honest, candid conversations that are authentic. I do love the idea of connecting with others on a human, simple level. Those are the conversations I try to have whether it’s about sports, entertainment, pop culture, politics; I just try to connect and share great stories.

What can we expect to see from Cari Champion in the future?

I am working on a show with a great friend of mine. Hopefully it will be on air by the end of June or beginning of July. We’re excited about it. It’s the perfect example of power in every arena. I am also working on the podcast. There’s a lot going on. In the pandemic, we don’t know when we’ll be able to get back to work the proper way. In the meantime, we’re taking these shortcuts. I don’t think we’ll ever go back to work like we think is the “normal way.” I think a lot of people are going to realize that they can work from home and they’re going to have to make adjustments. That’s just the new norm. I know right now, I’m in the process of trying to get my house ready if my house is going to be a studio (laughs). 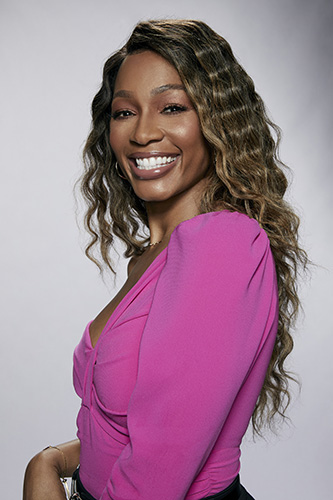