The Disney+ Original movie “Cheaper by the Dozen,” which is a fresh take on the 2003 hit family comedy starring Gabrielle Union and Zach Braff, premiered March 18, 2022, exclusively on Disney+. Check out the trailer for a glimpse at the funny and heartwarming story of the raucous exploits of a blended family of 12, the Bakers, as they navigate a hectic home life while simultaneously managing their family business. 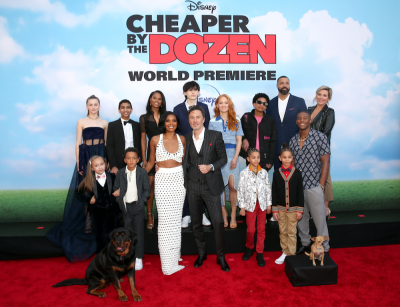 The new version of Cheaper by the Dozen is like a new edition that I didn’t know I needed. It’s honestly like a 21st century update of our current life. Which it touches on co-parenting, socialism, interracial dating, colorism, racism and more. This version is very relatable to anybody’s current life.

When talking to Durrett about dealing with colorism within your own culture. He opened up about people thinking he was “soft” because he is light skin and pretty much getting use to it while growing up.

Durrett plays the father of Union’s character which they have to learn how to co-parent during the film. Which his character also shows us that just because you have more doesn’t mean you’re a better parent.