Chef Scotty Scott who has been featured on The Today Show, NPR, The Dallas Morning News, and Insider, in regards to promoting his new soul food cookbook “Fix Me A Plate” recently hosted “The Remix” an intimate VIP Tasting reimaging cultural traditional recipes by exploring personal taste on Thursday, June 2nd located near the Atlanta University Center. Chef Scotty also appeared on Fox 5’s “Good Day Atlanta” the morning of his event, creating quite a buzz and excitement for himself and those attending.

The evening was centered around Scotty and him authentically introducing himself and his delicious food to the Atlanta market. Media and high-profile guests filled the event space as they experienced a VIP Food Tasting like no other. Chef Scotty was prepared to bring the heat and served his guests three rounds of his tapa, soul food brunch style cuisines where he tantalized the ingredients. Meals for the night: Blackened Shrimp & Fried Polenta (Grits), Chicken & Brown Butter Sweet Potato Waffles with Maple Bourbon Sauce, including Peach Cobbler for dessert. 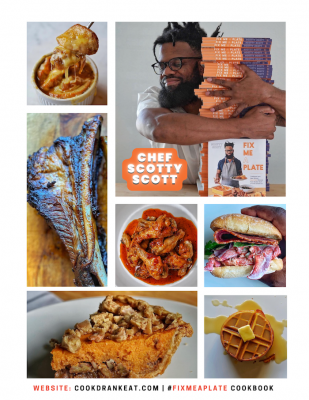 Atlanta’s finest Industry Tastemakers were also entertained with Revance Cognac Passionfruit Mimosas aka “Scott-tails” sponsored by Revanche Cognac, a multicultural brand, plus Bomade Vodka, and Old Fourth Distillery’s Whiskey Bourbon. The adult drinks had the night in harmony along with good music. In addition, we got a chance to hear from our VIP Guests like Charles Ford (who recently ran for Cobb County Superior Court Judge), Dr. Alon Holliday (Member of 100 Black Men), as well as Kass Lately with Lately Entertainment, who hosted a brief Q&A featuring the uprising chef.

Recently, the Dallas Fort-Worth food architect attended the 42nd LA Times Festival of Books where he executed a mouthwatering cooking demonstration of his infamous “Blackened Shrimp & Fried Polenta” also known as “Shrimp & Grits.” Once the demo was over, Scotty then hosted a successful book signing.

The day before Scotty even flew out to LA, he and his wife welcomed their second bundle of joy into the world. That’s right, Chef Scotty is also “the dad of the year” by being present during child labor as well as making a sacrifice to still travel to California for a once-in-a-lifetime opportunity.

As you can see, Chef Scotty is a devoted husband, father, and cook who puts 1000% into everything he does. The fact that Scotty passionately embraced his love for cooking and photography by posting captivating photos of his delicious plated cuisines on Instagram is how he was discovered by a publishing company that offered him a book deal. 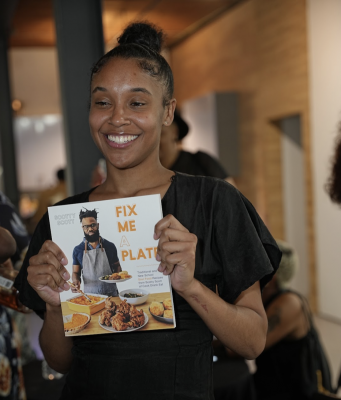 With the inspiration from his mother and the traditional handwritten recipe book she passed down to him, since the age of 11, the Detroit native has been in the kitchen exploring ingredients and remixing grandma’s one-of-a-kind recipes. He even references an old family cookbook that’s been around since the 1950s. Mind you, there are over 50 recipes found inside “Fix Me A Plate” which is available on amazon.com and at CookDrankEat.com.

Without further ado, the lawyer-turned-chef is blessed to have brought his love for food and people together in one place on Thursday, June 2, 2022, presenting to Atlanta, GA “The Remix.”

If you are interested in having Chef Scotty Scott as a guest on your platform for a press interview and for serious press/general inquiries, please contact publicist Kenya Sheats via email at kwfmwritingsolutionsco@gmail.com.

About Chef Scotty Scott
As a Detroit native, watching his mother in the kitchen and his father on the grill, Scotty ignited his love for cooking. Now based in Ft. Worth, TX  he is a personal chef, recipe creator, and content director, bringing his audience on an indulgent journey. Using his social media platform and debut cookbook titled, fix me a plate Scotty wishes to introduce you to soul food remixes highlighted with mouthwatering visuals.