‘Christmas in Evergreen: Bells Are Ringing,’ Star Rukiya Bernard Talks Representation in Hollywood: ‘I Want to Be a Shining Example of What’s Possible for Black Women’

Rukiya Bernard, who discovered her incredibly strong love for performing at a very early age, is set to star in her first-ever lead role, as Hannah, in upcoming Hallmark original film Christmas in Evergreen: Bells Are Ringing. The festive movie, which is the fourth installment of the popular Christmas in Evergreen series, premieres on the network on Saturday, December 5 at 8 p.m. EST — just in time for the holiday season. Bernard, known for her heartfelt, honest and sometimes hilarious roles, recently opened up to Sheen Magazine about how she feels to be the film’s leading lady. “I felt honored and I loved the challenge,” she tells Sheen. “I was given a lot more work at a capacity I never had to fill before and I put my heart and soul into it.” The entertainer, who describes her new role as impactful, also tells Sheen that while working on the forthcoming movie, “I got to grow myself as an artist and grow my craft as an actress.” The Gourmet Detectivealum also tells Sheen about her new holiday tradition, Fall fashion and the importance of black representation in Hollywood.

Reflecting on her childhood, the Van Helsing series regular vividly recalls when she first uncovered her desire to perform. A young Bernard would regularly transform her family’s living room into her very own stage where she would often practice her budding passion. As she recounts, she would frequently dress up in costume get-ups to host fun skits and creative dance shows inside her home. Her parents dubbed their little star “Ms. Dress Up” soon after she began demonstrating her skills. Bernard went on to continue entertaining her loved ones from inside her home through the years — until she ultimately decided to pursue acting as her career.

After learning the ins and outs of the art in her final days of high school, the Android Employed alum declared theatre as her major of study for her undergraduate matriculation at Ryerson University. She has never looked back since. “At first, acting was about entertaining and making people laugh,” she tells Sheen. “I loved the interaction with the audience. But now, I’m at a point in my career where I want to be a shining example of what’s possible for black women to younger black actresses coming along. I really feel that representation matters in film and television.” 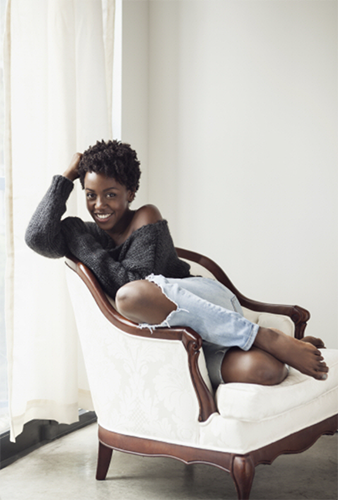 Excitingly this holiday season, Bernard stars in Christmas in Evergreen: Bells Are Ringing as the compelling role of Hannah. The movie follows engaged Michelle (played by Holly Robinson Peete) as her wedding date quickly approaches. With nuptial plans in full swing, Hannah must step in to help finish the launch of the new Evergreen museum. Meanwhile, she’s questioning her own relationship future with her beau Elliot. “Hannah is very busy and spreads herself thin while helping people because she loves being a part of everything in the town of Evergreen,” details Bernard. With an amazing cast that also includes fellow stars Colin Lawrence, Antonio Cayonne, Ashley Williams and Barbara Niven — Christmas in Evergreen: Bells Are Ringing is sure to be a family-favorite, rom-com hit.

While the movie drops this Winter — one thing Bernard wanted to highlight is her impressive Autumn style. “My Fall fashion wardrobe is filled with richly saturated jewel tones like amber, emerald green and sapphire blue,” says the star. Bernard tells Sheen that she truly enjoys collaborating with the Hallmark Channel. As a black woman herself, Bernard candidly reveals that she wants to see more black women cast in leading roles, playing characters that are depicted positively. When asked which types of projects she’d like to work on next, Bernard says, “Romantic comedies, thrillers, horror – I’m open to all genres. I want to work on projects with positive images of black people and people of color in general. That requires people of color to be in leading roles.” She wants to be known as someone who can light up the world up through acting. For Bernard, showing love and compassion onscreen is at the heart of her work.

The mom of two, who recently began her own holiday custom, wants to set an example to her children and individuals who want to act. She tells Sheen: “Every Christmas, my family and I go to our cabin and cut down the tree together. Then we decorate it. I give love on Christmas day by connecting with family and opening presents. While on set, I learned about the ‘Gratitude Bowl’ from my co-star Holly Robinson Peete. It’s a new tradition that I’m starting with my family this year. Every family member has to write down something they’re grateful for, then guess who wrote each gratitude note and talk about it together around dinner.”

Be sure to catch Christmas in Evergreen: Bells Are Ringing on the Hallmark Channel Saturday, December 5 at 8 p.m. EST and follow Rukiya Bernard on Instagram and Twitter.

Jessica L. Dupree is a freelance writer and content strategist. She is passionate about storytelling in Entertainment, Business, and Politics. She has interviewed Governors, Entertainment Legends, and some of the highest ranking Global Business Executives. Dupree is a member of Phi Theta Kappa honors society and resides in Los Angeles, California.