Powerhouse and  defensive end, DeMarcus Lawrence, is sick after the Uvalde,Texas shooting. The tragic event shook the nation, taking all who watched the news by surprise. The elementary school’s lack of defense sparked a cry in every state, especially in its home territory of Texas.

Lawrence first took to Twitter to address his initial outrage saying, “Another day, another senseless act of gun violence. I will continue to use my platform to build up better leaders because our leadership today has let us down time and time again.”

Governor of Texas and NRA supporter, Greg Abbott, was the center of these tweets. Lawrence directly asked the governor what he plans to do about the easy access to dangerous firearms. Although, he is not the only one who has taken Abbott to task over the tragedy.

He even reached out to LeBron James in a tweet to partner with him. “ Let’s work together to get ample security systems built for all those who don’t have them!! Our kids need us since our government won’t. 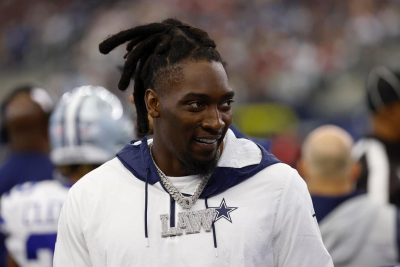 Originally from South Carolina, the small town boy has become a big time man in Dallas, Texas. Lawrence is currently the top defensive end for the Dallas Cowboys and is happy to make the state his home. However, this threat of violence left his new home in shambles and he is set on doing what he can to rectify the situation.

Times like these, he is hoping the community will also be able to come together to encourage a safer community. It was after a team practice that he and QB Dak Prescott conversed with reporters about the shooting. DeMarcus made it known that this is a pertinent issue to him and he is working to help in any way.

To start, he is looking to provide security to schools that have trouble affording the luxury. With recent events, enhanced protection has become a necessity. With the security, he is also looking for proper training to deal with situations like these and others like it.

A family man is the true core of who DeMarcus Lawrence is. He sympathized with the parents of all who attended the school as he would not want his own children to be in fear of their own education.

“Schools should be safe zones for teachers and students, and no one has the right to strip that away.” – DeMarcus Lawrence.

Keep up with DeMarcus Lawrence on social media @tanklawrence