David Sabastian: “My goal is to get as big as I can, so I can create as much impact as possible”

David Sabastian is the true definition of a multi-hyphenate, someone who’s creativity extends far beyond what meets the eye. Born and raised in Los Angeles, real name David Miklatski is a recording artist, fashion designer, and overall artist all in one — with an unwavering passion for art and the process behind making it.

The West Coast rapper states, “If I had to give a summarization of who I am, I am a metaphysical being living in the physical realm, creating dope shit.”

Most recently, David unleashed his critically-acclaimed new project titled Gangsta Grillz: DJ Drama Presents David Sabastian God Save The Rave. The 8-track project was recorded in-person with the legendary DJ Drama in Atlanta over the course of three days, with David producing, designing, and creating visuals for each song on the tape.

In addition, David Sabastian has his own clothing label called Skid Row Fashion Week, created to help house and employ the homeless community in Los Angeles.

Sheen spoke with David Sabastian in downtown Los Angeles to discuss his roots in Los Angeles, the new project, wanting to make an impact, and more!

You’re always fly and on the fashion tip. Can we talk about this bomb ass jacket today?

[laughs] It’s made out of Mexican wrestling heads. You know what’s crazy, I normally would create some weird shit like this, but I was walking down the street and I seen some boutique. They had it in, I’m like what is this? I was instantaneously jealous that I didn’t come up with the idea, ‘cause I be in the alley and I be seeing the heads. They had some thigh high boots for women with these fucking heads on them, it’s pretty fire. The pants and the hat is Skid Row Fashion Week.

I grew up in Torrance, but I grew up in Koreatown really. Koreatown, Torrance, South Bay. It was amazing actually, wouldn’t choose it any other way. Growing up in a predominantly Latin and Korean community, being a young biracial boy has its challenges. But I went to Virgil, I went to Belmont, I went to Fairfax. It was an interesting childhood, to be honest.

What did you want to be growing up? Because you do a lot beyond the music.

Honestly, the first thing I remember saying I wanted to be was a cardiologist. I remember being eight years old, they’re like “what do you want to be when you grow up?” I said “a cardiologist. A heart surgeon.” I think I just said that because it made me sound smart, but I just always knew I wanted to impact the world in some way. And now, I chose art to do that.

Do you remember when you fell in love with music?

Yeah, probably a child laying in my living room and my mom’s spinning “Thriller” on the vinyl. Or Teddy Pendergrass or Luther Vandross. The earliest memory of music I have is my mom spinning some vinyl.

When did you realize you could do it for a living?

When I was 16, fresh out of high school. I don’t know if I thought I could do it for a living, but I always knew whatever I chose to put my energy into, would yield success. 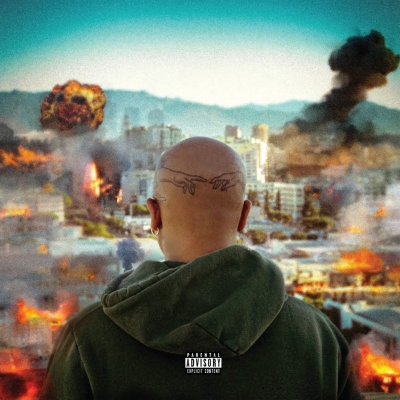 It is kind of huge, for sure. There’s certain pillars that have inspired me to be a rapper. I will honestly say the Lil Wayne Gangsta Grillz was a pivotal moment in that. College Dropout was one of them, The Blueprint by Jay Z and Gangsta Grillz. So to be able to do it is very surreal.

My partner Sara just sent him a DM. I know that sounds crazy, but sent him a DM and he said he rocked with what I do. Reached out to my guy Jean, my manager Jean. Jean hit him and it happened very, very fast. It went from that to “yo, you got a week to do the album.” We did the album and then shot all the videos.

Why only a week?

Because right now with Warner, I’m about to release my other album, and they didn’t want to conflict schedule wise. They want to stay on point. So if you’re gonna do it, you have this much time to do it. We did the whole album in three days.

How was it being in the studio with him? Because he’s legendary.

It was cool. I use the studio as an instrument. Just creating the body of work was very, very simple. When music becomes complicated, it sucks. Music should be very, very fluid. Whether it’s this project, my next project or any music I’ve ever worked on, it’s never been complicated.

Why’d you name it God Save the Rave?

Honestly, the name was at first gonna be called “My Mercy Prevails Over My Wrath,” which is this tattoo. And the cover was going to be my neck tattoo, then someone shitted on that idea. It could’ve been Jean, he’s like “that’s shit’s too complicated!” I’m like alright cool. Then it was just gonna be DJ Drama Presents David Sebastian. My homie Miguel, he threw a party called God Save The Rave. I saw it like hmmm, that’s tight. I went in the studio, it was just a song. It was just a song on a project. “God save the rave, God save the rave!” I was like oh, that works.

Talk about shooting that video too.

Sent out a text to some friends, we actually destroyed a Turo car. I’m kicked off of Turo now. ‘Cause we went to the Escalade and went through the front glass, which sucks but it was a fun experience man. It was definitely a fun experience.

You played Ebro the album, how was that?

I did play Ebro the album. Ebro’s cool. I’ve been fucking with Ebro for a long time. Initially caught his attention by going on Instagram and telling everyone to tag Ebro. He hit me back, then I did the same thing with Larry Jackson. I said, I need everyone to spam the fuck out of Larry Jackson. Tell him I need to have a meeting with him. Literally two days later, Larry slid in my DMs he was like, what’s up? You know.

Bro, I did the same thing — that’s how I met Kanye for the first time. I literally went on my IG, back before I was shadow banned and I had reached on my IG. I said yo, I got 20 bands for anyone who could put me with Kanye. Dame Dash reached out to me and he said, “keep your money. I’ll put you with Kanye.”

What’s your relationship with Dame? That’s the homie.

One thing you want fans to get from the project?

Honestly, I have albums that are introspective. That talk about my mentality, the way I see the world, and shit like that. But this album, I really want it to be something you can play and have fun to. At nighttime, when you turn up. The last record is super deep, telling my story. But beyond that man, I just want it to be something you can enjoy. Just a nice audio experience.

And you’re re-releasing We Are God?

We are re-releasing We Are God. It’s 12/12 tentatively, coming out sometime in December. Shot a bunch of videos for that so I’m super excited. We Are God, that’s how I got this partnership with Warner. It opened up the floodgates, just selling that shit. I sold it for $7. Kevin Durant sent me money. Dame Dash sent me money. I’ve made a quarter of a million dollars off of this album on Instagram.

How did Kevin Durant catch wind?

I met him before because I did some designs for his Nike deal, but people were just supporting.

Talk about blending music and fashion, and how it all plays into your artistry?

I’m a multidisciplinary artist, so I make music. I make art. I make clothes. I shoot films. When you’re making music, you gotta get dressed right? You make music, you need a visual to it. I don’t categorize art. Art is music, it’s fashion, it’s film. It’s all this one thing, and that’s how I’m able to express myself on so many different platforms. It’s just a language man. Creativity is a language. If you get it, you got it.

Skid Row Fashion Week, 2023 is going to be a very big year. Big collaborations, big expansion, getting a warehouse. Huge warehouse downtown that I’m gonna convert into housing for the homeless. Hiring, rehabilitation centers. Just taking it to the next level. We started with t-shirts and hats. Now, we’re doing full cut and sew menswear, womenswear. A bunch of cool shit.

What are you most excited for next? Do you have any goals?

Coming up here, I seen this kid across the street. Kid had to be 14 years old and he was shooting heroin. I was looking at him like, what’re you doing? Man, it hurt my heart to see someone like that and this is America. But my goal is to get as big as I fucking can, so I can actually create as much impact as possible. That’s really the only reason why I make music, make art, anything, is to get as much influence to be able to do something. Because politicians don’t do anything, these rappers don’t do anything. These billionaires don’t really do anything. It’s very few people who have the balls to actually do something and I’m one of them. That’s my goal, to do as much as I can while I’m here.