In his stage play 1800s vs. 2020, Richard Gallion holds a mirror up to society, revealing a reflection of America’s sordid past during slavery. The play is arguably an amalgam of everything Gallion has created up until this point, as the actor, playwright, athlete, educator, and activist has incorporated every piece of his life into his art.

Can you tell us, who is Richard Gallion?

A man with multiple visions, plenty of goals, faith in God, and a lot of drive.

When did you know you wanted to be an actor, writer, director, and producer? 12 years ago, after getting injured in Basketball I got bit by the acting bug. I realized I had a passion for the arts as well as the gifts to bring any movie, film, or stage play to life.

As an actor, can you tell us about your first acting role and how it came about? I was at a rehearsal with a friend, and I was asked to read a role because one guy was a no-call no-show. Turns out I was okay with acting, and I was offered the role.

Can you tell us, who is someone (actors or directors) that you still would like to work with?

As a multi-talented writer, director, and producer of five highly acclaimed stage productions and more. Can you tell us about your first stage play and what was the motivation behind writing it? I actually have 9 stage plays now. But my very first production is called “Living Without Love” I was writing how I assumed a conversation would have gone between my dad and I. We didn’t have such a relationship as I was growing up and I wanted to spill my heart out to him but at the same time forgive him. I realized that you give people so much control over you when you can’t forgive. The other part of that is forgiveness is not for the other person, but it is for you. 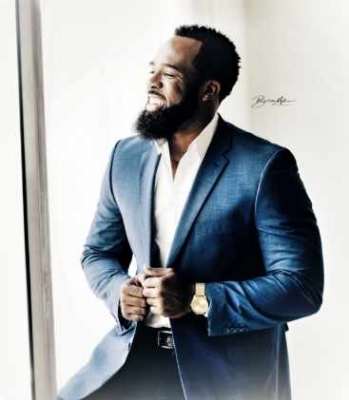 You currently have a highly sought out and requested stage play, 1800 vs 2020. Can you tell us more about the play and what led you to write it?

It’s a conversation that happens between the people from today and our ancestors in the 1800s. It came about when I was working on my “What if” series and that’s the question I asked myself. What if the slaves from the 1800s were to talk to the people today in 2020? How Would that conversation go? I would like to think this would be one of the most interesting, thought-provoking productions anyone has seen or written in a while. Is it that slaves from the 1800s were physically enslaved, while people from 2020 are mentally enslaved? How different are we in 2020? Or did the years only change? I will admit that this is a must-see, educational, thought-provoking show that I believe will start a conversation that will help a lost and divided world.

On the website, it indicates the play is offered as a virtual theater called a field trip, can you tell us more about that?

Absolutely! As a former educator, I understand that SEL is a need and necessity for our youth. So, my team and I created a 12-page activity guide which is nothing short of a curriculum and we deal with SEL in all of my productions. So, schools all over the world can experience the show Virtually which provokes great dialogue, inspires, educates, come together, as well as appreciate what our ancestors went through for our freedom. The youth have been receiving this show very well.

With 1800 vs 2020 being such a powerful, educational and thought-provoking play, what would you like the audience to gain?

I want people to understand how far we’ve grown in so many ways but yet still enslaved other ways. People will see that slavery went from physical to mental and the physical aspect that still exists is not about your race anymore, but about gender and age. The new word for slavery is Human trafficking.

What advice can you provide to teens and young adults that are interested in starting a career in acting, writing, or directing?

Chase your passion and don’t let others push their fears or failures on you. The way you know it’s your passion because if money wasn’t an issue what would you be doing every day for the rest of your life.

What would you like our views to gain from this interview?

I would like them to know my “why” behind this project and get to know me as a person.

How can people continue to connect with you?