What started at her old stomping grounds led to the brewing of fueled her eruption. Real Estate- Actress Page Turner projects on being a businesswoman, who not only helps others on and off the screen, but by flipping her goals as well. Born and raised in Los Angeles, Turner started her career when working for Magic Johnson throughout his enterprise. When scouting in urban areas to begin building, Turner brewed into boss mode that would follow up to owning an empire. Defining the means to be dedicated, Turner surpassed the expectations given as a single mother.

Having the title of “entrepreneur” passed down, it was no secret to what motivated Turner to be involved in real estate. “My background and working for a giant like Magic Johnson who is a self-made, self-built entrepreneur, and my mother who was an entrepreneur, and my father was an entrepreneur, so I was carrying that torch anyways. And to find myself in real estate it just all makes sense from that part of my journey.”  While balancing her platform and still wanting to be a mother, Turner’s main key factors are what helped elevate her entire business. “I wanted to be home with my babies as much as I could, I wanted to make my own hours which once you get into real estate you realize you can become a slave to real estate. But I at least wanted the option of being able to work my own hours which I was able to do and not put them in daycare which I was able to, and I wanted to stay home with them.”

Looking forward to “A dream realized” when selling her customers who are majority first-generation buyers their dream homes grew anticipation for what was deemed next. When curious about gearing up for her new show on HGTV channel and Discovery + named “Fix My Flip,” Turner was prepped for all possible outcomes. “The experience it’s amazing!  What I’m doing is I’m going in with my own money, a plan, to help mostly novice first-time flippers get out of a hole that they’ve dug whether it’s because they bought a house unseen, they don’t have a budget, or they just didn’t do the proper pre-planning to get in this business to be and remain successful. So, I come in and I help them, but what I really get to see is people win. And people getting out of a tough place.”  The show also gives insight to those who witness each story unfold. “Number one, their gonna immediately know that flipping is a business, and it’s not as easy as we make it look. Number Two, you better have a good budget, and you better pad your budget by ten percent because there is going to be unknown’s that happen while you’re flipping because there’s no such thing as an easy flip and you want to be prepared so that you don’t get stuck. Number three, find a mentor, a lot of people jump in thinking that it’s an easy business only to find out that it’s not and then they don’t know where to go for help.” 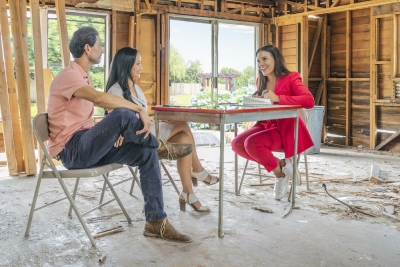 As seen on HGTV’s Fix My Flip, our first time home flippers agree to work with Page Turner to rescue them on their flip.

Going back to where it all began, Turner speaks on her achievements that are considered her reality. “I come from a line of single moms my mother who was married to my father died when I was eight. She was a single mother, my grandmother was a single mother, my aunts were single mothers, and as brilliant as we all were, none of us went to college right after high school so I also became a single mom of three daughters, and it was my life’s goal to graduate them from college. All on time, directly out of high school and because of a plan, comes a whole lot of work, a lot of tears, a lot of prayers, a lot of laughs, and a whole lot of money from real estate.  I was able to graduate my children with degrees on time all three black women.”

Resulting to what can be manifested into the future, such as more seasons for her show “Fix My Flip” and working on her own production company when in front or behind the camera, Turner secludes a final statement to her younger self that’s been flourished into the well-rounded business she is today. “Number one your mamma was probably right so listen to her, also just don’t sweat it, get through the fear, and just do it I spent a lot of my time worrying about what other people would think and I wasn’t my brightest self because of that it just has to do with mental appear. I’d rather just see other people shine than me and not accepting that if you’re in your purposeful lane, and you’re operating in your gifts, then let your light shine, cause not even a shadow can dim your light.”