Dove published a short film, As Early As Five, based on these research findings and inspired by far too many true experiences of those who have faced hair prejudice and bigotry in both schools and the workplace. As Early As Five illustrates three situations of race-based hair prejudice that a girl faces in elementary school, high school, and adulthood, all of which are based on true incidents. 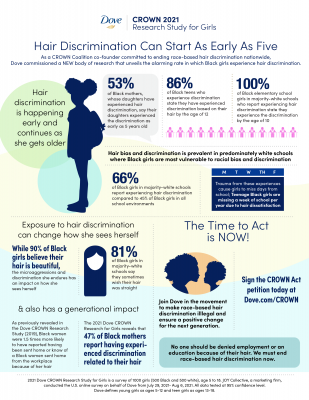 “Our groundbreaking 2019 CROWN research study revealed that Black women are 80% more likely to change their hair from its natural state to fit in at the office. Now, this new body of research illuminates the pervasive nature and deep impact hair discrimination has on Black girls highlighting the horrific multi-generational impact of narrow beauty standards in America. These biases continue to perpetuate unfair scrutiny and discrimination against Black women and girls for wearing hairstyles inherent to our culture. This is unacceptable and why it is imperative that everyone join the movement to make hair discrimination illegal nationwide through the passage of The CROWN Act,” says EVP & COO of Unilever North America, Esi Eggleston Bracey.

Through this campaign, Dove aims to increase awareness for the CROWN Act legislation and create urgency among parents, school administrators, and advocates to sign The CROWN Act petition at Dove.com/CROWN to make race-based hair discrimination unlawful nationally.

Dove believes that Black women and girls should be able to wear their hair as they want without fear of losing their jobs or academics. Therefore, dove continues to advocate for local and federal governments to pass The CROWN Act to help protect the estimated 2.3 million Black children nationwide who are most vulnerable to race-based hair discrimination. The CROWN Act is currently law in 14 states.

Photos and images courtesy of Dove