Gangsta Boo is a legend in the rap game, and she deserves all her flowers! Real name Lola Mitchell originally hails from Memphis, best known for being one of the original founders of the legendary group Three 6 Mafia. Having started rapping at the young age of 14, Gangsta Boo sparked a whole movement with her unapologetic bars and undeniable storytelling… decades later viewed as one of the pioneers of female rap.

Fast forward to 2022, Gangsta Boo celebrates her standout role on WE TV’s Marriage Boot Camp, alongside boyfriend Emmett. Additionally, most may recognize her from the viral VERZUZ moment between Bone-Thugs-n-Harmony and Three 6 Mafia, when the fight broke out on stage amongst both crews. Apparently, Bizzy Bone first threw a drink in Gangsta Boo’s direction… and the rest was history.

SHEEN Magazine had the pleasure of sitting with Gangsta Boo at her exclusive pop-up dinner party, with a full menu of Southern cuisine created by Chef Joi.

What does it mean to be here, hosting a dinner for yourself?

Did you see the menu? Look at the menu! First of all, we got the Gangsta Boo Biscuits, the Boo Print Salad. I feel happy as fuck. My voice is gone!

What does it mean to be on Marriage Boot Camp on WE TV? Did you think you’d be doing reality television?

No I did not, BUT it feels natural. It feels like I’m just being myself. I told my friend that earlier, I said, “I’m not even scared of the camera.” What you see is what you get with me, literally. I’m the fucking sweathearted crazy heart, so it feels good. It feels good to see and constantly be having opportunities. 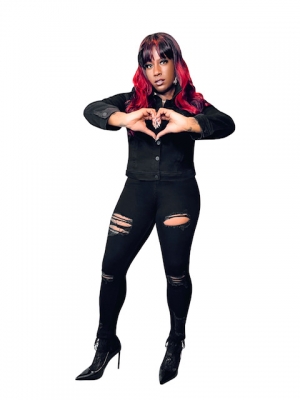 How does it feel being in such a legendary group such as Three 6 Mafia, as well as being an underground legend in female rap for crunk music?

It feels like I got the spirit of a lion, Leo the Lion. [points to necklace] It’s real gold, 18 carats. Grab it, it’s heavy. And it’s soft. Shout out to my girl Wendy Brand because she made it for me. I feel powerful.

How does it feel to be a pioneer in the female rap scene?

Shit, I learned from Madonna, Cher, my mama. I’m a fan of women before me.

What are you most excited for next?

Anything else you want to let us know?