Fanbase CEO, Isaac Hayes III Speaks on the Importance of Monetizing Your Content on The Digital Space, Quarantine, & More!

New-aged tech pioneer, Isaac Hayes III made history back in November 2020 when he became the second black man to raise $1 million on StartEngine and the third person ever with crowdfunding! To say he’s completely changed the way we look at creating content on the digital space would be an understatement. With much success with his app, Fanbase – it intrigued us to speak with him about his journey to success so far. We caught up with Isaac to discuss the start of Fanbase, what it was like making history on StartEngine, and much more!

You started your career 21 years ago in entertainment! If you had to describe your journey to success in one word, what would you use to describe it?

Versatile. I say that because I feel like for me, there were many paths along the way to where I’m at now. They were all necessary. There was a lot of trial and error. There was a lot of learning about multiple industries and multiple skillsets just to do the things that I do now.

What inspired the creation Fanbase?

Honestly, two things. One, a friend of mine wanted me to join Twitch. He said, “You have a really great personality, you should join Twitch. They’re doing something called In Real Life Content and one of the things you have to do broadcast a minimum of 16 hours a day.” I honestly felt like I didn’t have time to do that. I was doing so many things. It was the subscription model that they had that I thought was interesting. I just didn’t have time, so I eventually forgot about it. Maybe a month later, I saw this kid that was dancing in a Spider Man costume and it went viral. He was from Memphis and I was born in Memphis, so I shot him a DM to congratulate him on his success. The first thing he asked me was if I was a manager. I never managed clients like that before, so I really didn’t know how to answer that. He told me he really needed a manager, but I ended up leaving that conversation saying that I would get back to him. I said, ‘Wow, this kid went viral. He has all this talent, and he doesn’t own Spider Man, but he owns his ability to dance and he should be able to monetize that.’ That’s what brought me to the idea to make Fanbase. People should be able to monetize their talent, any individual with a passion or idea should be able to monetize it, if they want. 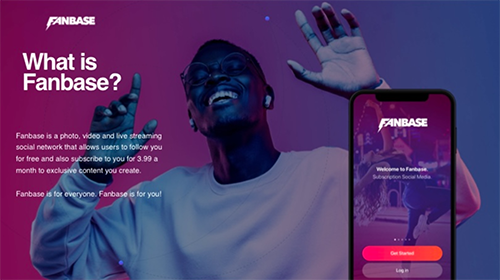 What was it like becoming the second black man to raise $1 million on StartEngine?

Well, it’s one of the greatest things I’ve ever done. I think it was a blessing first and foremost. I think the unique circumstance of what 2020 has brought with COVID and the combination that everyone was inside. I had some great mentors: Monique Idlett, Dawn Dickson, and Angela Benton were instrumental in me getting onto StartEngine to raise that money. It was timing, opportunity, and preparation. That’s the thing about success. It’s a simple formula. It’s when opportunity and preparation intersect. The opportunity presented itself to be submitted to StartEngine and I was prepared. That was it. It’s as simple as that. I’m really excited and grateful for the people that decided to invest. Now we have capital to make the company be as big as it can be.

Honestly, I used 2020 as a year to decompress. It gets hectic. My schedule was hectic in 2019.  I have this office where we used to have ten people in the office every day. I have a radio station and there was just a lot going on. When everything slowed down, it just gave me a year away from people. I honestly enjoyed it, I know that sounds crazy, but I really enjoyed the isolation and the space to concentrate and focus. That’s what quarantine life has taught me. It gave me focus. There is not a lot of extracurricular stuff, I really wasn’t a partier to begin with and there’s not a lot of events that I’m going to. There isn’t commitment that is making me travel or move around. All I was able to do this year is focus on Fanbase for the entire year. I think that really assisted me.

Currently, we’re building the Android version for Fanbase. We are still accepting money. Anyone can still invest at StartEngine.com/Fanbase. You’ll be put on the waitlist and all waitlisted investments up to $3 million will be accepted in January of 2021. We’re working on more features. We have some content creators that are coming on the platform. We also have a limited series coming as well.