Celebrating Black History Month since childhood has been a mindset. However receiving an award for Fashion Designer, Stylist and Entrepreneur during the Annual Black History Heritage Celebration 2020 is an understatement. I was surprised and elated to also receive the Proclamation for expression of style and fashion from the City of Pittsburgh which is my hometown. This is a testament that you never know who’s watching you; in which I encourage young people to be mindful of. Most times others remind me of how much I have achieved especially since looking toward the future and setting goals is my focus.  I’ve received numerous awards throughout sixteen years for hair and fashion however to be recognized during Black History Month means the most. I’m proud to be a black woman who understands the challenges our race have faced and overcome, yet the battle of injustice is not over. This is why it’s important to make a difference by setting an example and passing down to the next generation’s mindsets I’ve learned from my parents and ancestors. One of my motivations for creating a hair salon and fashion house is to ignite visibility and representation of our beauty. The second motivation is my parents didn’t work hard and pass the baton for me to be laid back. 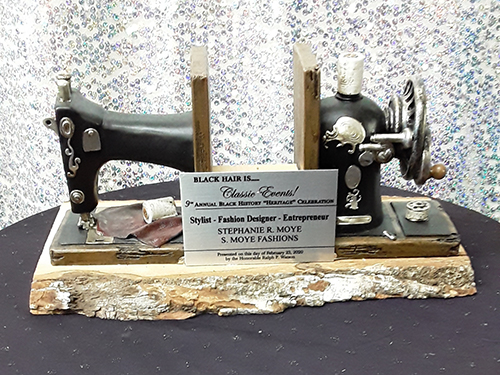 There are many Fashion Designers who are an inspiration like Ann Lowe who was the first noted African American designer born into a lineage of seamstresses with an  established  dressmaking business in Montgomery Alabama where my mother was born. Her grandmother was a formerly enslaved dressmaker who established their business with her daughter Ms. Lowe’s mother; however Ann Lowe took over the business after her mother’s sudden death at sixteen years of age. She was known for her one-of-a kind designs from the 1920’s to the 1960’s for high society matrons. Anne Lowe was considered a best kept secret due to segregation. For instance Ms Lowe was chosen to create the entire bridal party for Jacquelyn Bouvier who wed Senator John F. Kennedy who later became President of the United States. Ms. Lowe wasn’t given credit for her wedding gown and bridal party for former First Lady Jacquelyn Kennedy in any media at that time. This is why it’s so important to recognize the trailblazers before us and those to come because we aren’t just Black History; We are American History.