Finding Your Purpose Through Adversity

Not everyone has the same opportunities in life, but life can be more than you can imagine if you continue to believe that there is no end to possibilities. One thing that I’ve taught myself is no matter what my circumstances look like, I can choose to dream big. I allow my imagination to take me to places that my feet couldn’t and believe it would become possible one day. Struggles don’t last forever when you are determined to change your outcome.

When speaking with Pierre Williams, he reminded me that you don’t know what lies ahead until you take off running to see what is in your path. Sometimes you may have to face challenges head-on to know what you are made of, but that is a part of the process. We all have to run our race.

Pierre Williams grew up in Los Angeles- in not the best area or circumstances, but didn’t allow what life taught him at an early age to deter him from seeking more for himself. After graduating high school, young Pierre joined the military and became a Non-Commissioned Officer in the Army. He spent years in Special Ops in Iraq. But, once leaving the military, Pierre found himself wondering what was next on his journey. The transition back into civilization wasn’t easy for him. It was a mental and physical transition.

Pierre opened up and shared about his struggles with PTSD and how important it is that people seek help. Therapy isn’t always openly discussed, but it is necessary when reaching transitioning points in life. First, you must find the right person who creates a safe place to become open and honest. Sometimes it may not feel like it is working, but you have to continue working through your problems to live healthier. Healing is necessary.

Many people may struggle once they’ve committed their lives to jobs, people, or even relationships. When that time is up, they don’t know their next direction or how to cope with it. This can take a toll on your mental state. You never know what life will bring you until you live your life. Sometimes, you have to pivot and turn until you find your next direction.

Just like the world, Pierre grew up watching the legendary Jackson’s. After the tragic death of the iconic Michael Jackson, Pierre found himself Director of Security for the Jackson family. Never would he have imagined that the skills and training that he obtained in the military and throughout life would land him the position of protecting The Jackson Family. Working with the Jackson’s allowed him to sharpen his skills even more. Pierre went from protecting his country to protecting a well-known family on two different scales. Being in that space was just the beginning of many more high-profile people learning about Pierre Williams. You’ve heard that saying, “you never know who is watching .”Pierre didn’t know who was watching, but he was born to lead, and his gift was making room for him. After spending four years in Security, Pierre decided that this was a great moment to pivot again to start the next chapter in his life.

The next launch was a family business. Pierre and his brother started a union plumbing company with $20,000, and within 18 months, they turned that money into $2.1 million. Starting a small business isn’t easy, especially when you don’t have a lot of capital and don’t know what will happen next. Often, people allow fear to talk them out of doing things or finances. This story exemplifies two brothers utilizing what they had instead of focusing on what they didn’t have to hold them back. With faith and hard work, they were determined to succeed and prosper. 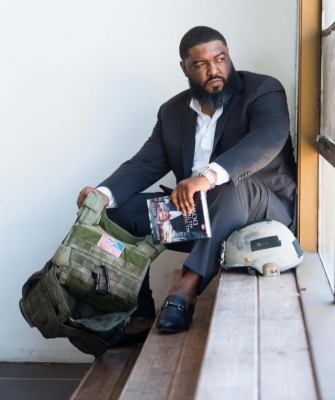 Having a military background with leadership experience, Pierre knew what it would take to overcome obstacles and challenges. The power of his determination made him unstoppable. He also never allowed fear to keep him from stretching himself to reach his full potential. Once the pandemic hit, things didn’t go as smoothly, but that does not mean new opportunities weren’t on the horizon.

While in the military, Pierre built excellent relationships that created unexpected opportunities that he could have never imagined. After many years of business, Pierre landed an opportunity of a lifetime. One day he receives a call about creating a publishing company focusing on publishing books by international leaders. He is now the owner of Seale Gadsby Publishing based out of Los Angeles and has landed publishing the memoir of his first client, Former President of the Federal Republic of Germany Christian Wulff, All The Way Up, All The Way Down.

When asked how he felt about this new role and where it would take him, I heard a chuckle and then a response. Pierre believes everything in life prepares you for something. He feels that in life, you are building your resume. He doesn’t look at it as a resume that you make on paper. Moreso, you’re creating a path for greatness. His journey has prepared him for this very moment. Even though it is new territory, this space allows him to become creative. There are many hats to wear in this role, but Pierre is equipped for the job. He was chosen for this moment and will do great things. There is an adage that says, “it’s not how you start; it’s how you finish.” I must say, Pierre isn’t finishing any time soon, but his story is a prime example of wherever you start doesn’t determine where your life could take you. The shift begins within. The renewing of your mindset can determine where life takes you. You decide where you want to go.