From ‘The Heights,’ Elevating to New Heights

When it comes to tv looks, he has styled celebrities and the Latin Grammy Award-nominated Dominican-American singer Anaís. Jonathan Fernandez first started on K. Michelle’s spin-off show, K. Michelle: My Life. He then branched out his talents to other shows and still perfects the fashion game with his skills. The proud Dominican-American didn’t have the easiest road to success, however, Jonathan Fernandez took the worst lemons to make the best lemonade.

How did you know that fashion, makeup, and hair was the avenue for you?

I grew up in a home with 6 women, all of whom were glamazons. I was always obsessed with painting landscapes. Bob Ross on PBS was amazing to me! I would watch my mom and aunts do their makeup and I would study it the way I studied Bob Ross’s painting skills. I was fascinated! Moving forward, high school was a pretty difficult time because I tried assimilating with other students at the all-boys catholic High School I went to. I dropped out and went straight to beauty school at 15.

The beauty school dropout was studying the fashion and makeup game without even realizing it. Amazingly, the celebrity stylist didn’t know the English language when he went to Kindergarten. Due to his background, teachers at his school insisted he should be put in ESL (English Second Language) classes. When the apple of his eye and Queen in his kingdom found out, she disapproved. His mother had him take an IQ test to prove that her son was too brilliant for those classes and

threatened to sue for racism if Jonathan did end up in ESL. Being a 1st generation American from the Dominican Republic, it wasn’t easy. His mother lived in Harlem NYC with family and thugged it out for her children’s American dream. The Heights taught Jonathan a lot and made him who he is today. He began reading Allure magazine and was fascinated by Brad Johns who was in the magazine. Jonathan was very determined to be his protégé and learn from the best in NYC. 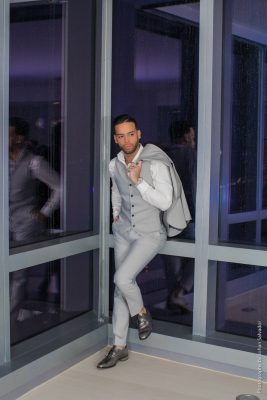 What was your most favorite makeup/hair/fashion look you have done?

When I was 19 years old my friend at the time Anais won the Latin version of “American Idol” in Puerto Rico and landed a record deal and huge success. I got to travel to many amazing destinations with her and even got to do some of her music videos. Anytime I got to do her for a red carpet where she was nominated or performing was always my favorite and still is to this day. I knew her way before she won on the show m, so to have been able to share her moments of such huge triumph felt like I was a part of something magical. I was watching her Cinderella story and I was proud of my work on her.

Anais and Jonathan have known each other for years (both on LHH) and he recalls them waking up having breakfast before her performance and just enjoying the moment. He gave her a beautiful soft look and from then on he soared with his talents. 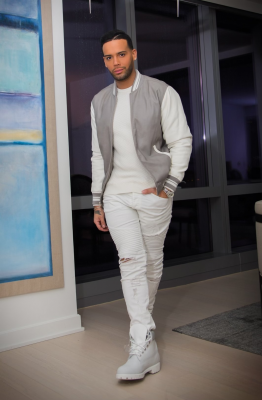 Being a member and proud advocate for the LGBTQ+ community, was it difficult to be accepted in the industry?

Funny enough, I found the most acceptance and solace coming into the industry while I was also discovering my sexuality. I got to see firsthand so many incredible, fabulous, and immensely successful gay men being unapologetically who they are all while making tons of money. The beauty industry saved my life a bit. It pulled me out of a deep depression to be surrounded by so many incredible people that looked and felt just like me.

Jonathan expressed to SHEEN that he felt like the men in the shop were his fairy godfathers at the salon. They took him in, taught him, trained him, and prepared him for an outside world that wouldn’t be accepting of who he was. Growing up Jonathan was judged by his diction, his fashion, and the way he walked. Being bullied is something he knows all too well, and still experiences to this day. 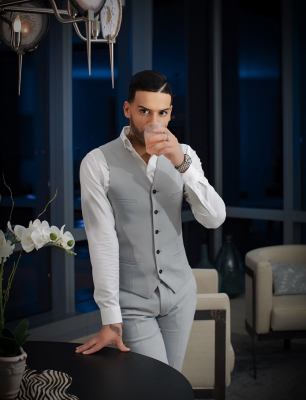 How are you taking a stand to bring awareness to your community in a positive light?

I learned early on that I am not just a reality star when it comes to my appearance and behavior on Love & Hip Hop. While I received so much love, I did also receive a little bit of blowback from my community and I gotta be honest, it hurt. I made such strides as a gay man & came on television to tell my story of gay conversion therapy which was not easy. I had to sit back and realize that I’m not just telling my story, I’m also responsible for how straight people who’ve never been around a gay person perceive all of us. I understand that the show airs in small towns across America where perhaps there is only one openly gay person, and I know that many closed-minded people will perhaps prejudge how he is based on how they’ve seen me behave on television so I do bear that in mind now when I perform on the show or in any public space.

While taking a stand for what you believe in might sound easy, in most cases it’s not. You are more than likely standing on a hill by yourself with supporters down below. You don’t realize the pressure people can be under especially while being criticized by the world. Jonathan expressed that he was sent to gay conversion therapy as a boy. This is a program designed to instill in a person’s mind who is gay, to believe they are not. Different activities play on children’s minds that set them up for failure in the long run. A lot of children grow up to be alcoholics, on heavy drugs, and even commit suicide. Even though gay conversion therapy is illegal in most states, some still see it as an effective way to make someone’s sexuality be changed. Jonathan is taking a stand by working with an organization that works against gay conversion therapy sites and putting an end to it completely.

What was the most difficult/challenging thing you had to accept? How did you overcome it?

My biggest struggle, which I think I still slightly struggle with, is coming to terms with the fact that many people across the world are still not comfortable or accepting of who I am as a person. People still feel so passionately against my community and it’s honestly so upsetting. Suicide rates amongst LGBTQ+ teens are at an all-time high and that still does not motivate the world to open up their minds and perhaps educate themselves on who we are. It 100% has been the root of all of my insecurities, traumas, and depression. It took a lot of soul searching to realize that the millions of people who hate me without knowing me truly don’t matter. What matters is how I view and value myself. Do I like the man staring back at me in the morning when I’m getting dressed? Have I made my family proud? Have I kept my promises and word to all those that I love? The world is full of hatred and it takes for us to block it out and send back love instead.

What advice would you give those struggling with their sexuality?

As corny as it may sound, all that I can say is that it truly does get better. Honestly. It may feel like the world is against you know but one day you’ll look back at today and realize that their opinion never mattered. They spew hatred and intolerance on you because hatred sits in their hearts and they have to release it somewhere so you’re an easy target. Don’t let them change you, stay true to yourself, and be so amazing that they have to respect you despite also hating you!

Jonathan left us with powerful words to remember. “We are magical beautiful people.” The world is programmed to instill in people that his community is different. They move with love, love love, and are love.. Jonathan explains how proud he is of loving who he is and his community. The LGBTQ+ community is hated by who they want to love yet, not by who they kill or steal from. As a people, it’s our job to educate those who are uneducated and stand up for what is right. Condoning is different from respect.