From Video Vixen to Photographer Extraordinaire Robin V is Every Woman

Robin V. is on a mission to highlight women in many ways. While laying the foundation in her career, Robin noticed that male photographers sometimes struggled to “capture the essence of true female beauty.” Find out how Robin used her talent in makeup artistry and connections to make a difference in our exclusive interview below.

“I’m originally from Baltimore, Maryland, but I’ve been in Miami for about 20 years. I moved down to Miami with nine hundred dollars in my pocket. And from there, I met a woman who owned a modeling agency with talent like Melyssa Ford. So, I did the whole video vixen thing for about five years. Also, at the time, I was a makeup artist for MAC cosmetics.

I started to get serious about my makeup artistry. So modeling took a backseat, and I did makeup for quite some time. Fast forward to 2010, and I became pregnant with my first child. While I was working, I was always standing on my feet. You know how that goes when you’re a makeup artist. I was rushed to the hospital because of very early contractions. I was four months and threatening to have an early pregnancy. So, I was on bed rest for my entire pregnancy.

I had a camera, and I started shooting my son because I was a new mom, and it was always him and I – together. Then it graduated to taking pictures of other women and children in my neighborhood. Other people started to learn about my photoshoots, and it grew from there. I would say it started there, but many of my experiences working as a makeup artist and as a model in the industry shaped it.

Did you take photography classes?

Self-taught! Everything was hands-on. I did a lot of research through books and trial and error.

When asked about her favorite subject to capture, Robin quickly replied, “Women! Because I am a woman.” Currently, she is working on a coffee table book that will host multiple photos of women taken throughout her career. 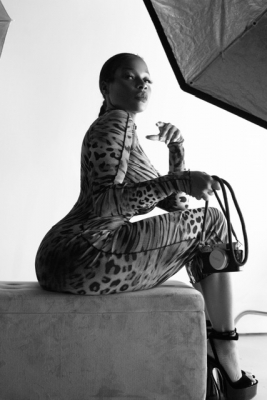 For more info on Robin’s masterclasses, editorial work, and upcoming events for 2022, check her out here.

All photos and images courtesy of Robin V, Raché Creque, and Brother Junior