In season 2 of HART TO HEART, Hart once again sits down with guests ranging from musicians to A-list actors who are leaders and legends in their industries. The one-hour, uncorked interviews take place in Hart’s wine cellar, where Hart and his guests engage in inspiring, insightful and humorous unfiltered conversations. 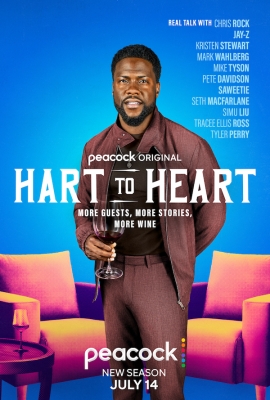 “After an incredible first season of HART TO HEART, I couldn’t wait to get back in the chair to have more raw and hilarious conversations with some of the best in the business,” says Kevin Hart. “There is something special about sitting down with a glass of wine, it brings out honesty and hilarity in guests and delivers real conversations that you won’t get anywhere else.”

SERIES DESCRIPTION:
In a series of conversations, A-list talent will join Kevin to reveal their honest, unfiltered, and unexpected true selves. It’s a place where the public will see the human side of our most well-known celebrities and world influencers. Each episode will be packed with meaningful conversation, open-dialogue, and a lot of heart.