Highly-Anticipated ‘I Am John Gabbana’ Documentary Set to Premiere in Atlanta, Ga August 12, 2022

Christian Rapper, Author, and Spiritual Influencer John Gabbana Wants You to Learn from His Mistakes. A exclusive premiere of
“I Am John Gabanna” at The EPICENTER

John ‘Boonk’ Gabbana’s story is one that has been waiting to be told for quite some time. John Gabbana, a native of Jacksonville, Florida, is a survivor of over 21 years of abuse. In the documentary, John details his journey from a traumatic childhood of food poverty and witnessing his stepfather’s passing from cancer to a teen life of drug addiction, gang violence, becoming a viral, yet unpaid social media star, to eventually, being a victim of gun violence. During his time as a social media influencer, John created prank videos and garnered over five million followers on his Instagram platform. The prank videos were created under the notorious ‘Boonk Gang’, as a tribe for John’s then followers to experience his viral videos.

I Am John Gabbana: The Documentary, is set to premiere August 12, 2022, in Atlanta, Georgia. From Producer Jennifer Pessima and Executive Producer Dolapo Erinkitola and Uncle Reece, comes the in-depth biography of one of the world’s most prolific young men. 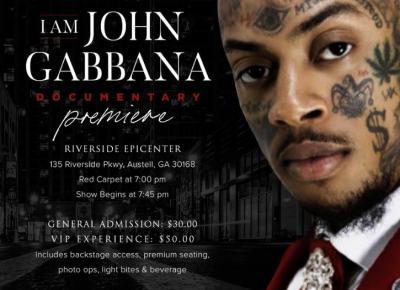 John Gabbana became a viral sensation in 2017 and would go viral again in 2018 for all the wrong reasons: a video of John overdosing on an unknown substance during an interview was posted online, ultimately causing heartbreak for his fans and followers. This viral moment would be the catalyst to the public realizing that John Gabbana was facing a very real problem that surpassed his social media influence. The documentary, with a 56-minute run time, highlights John’s fall and rise from tragedy to triumph while growing up in tough neighborhoods throughout Duval County.

“I gave the world my all, and I went straight to the bottom. It made me not want to live. I was fighting a battle, and all it took was for me to surrender to the presence of God.”- John Gabbana
The film was curated by: Director Jonathan Williams, Creative Producer Jennifer Pessima, Executive Producers Dolapo Erinkitola and Uncle Reece, and Cinematographer Michael Noir. During production, John found the mental strength to forgive many he felt wronged him in his life, including forgiveness for his biological father. His biological father had been absent from John’s life over the years, and John knew that by forgiving his father, he could continue to maintain internal peace.  The premiere screening of I Am John Gabbana: The Documentary will be held August 12, 2022 at 7:30 pm at Riverside EpiCenter in Austell, Georgia. Tickets can be purchased via the I Am John Gabbana Eventbrite page (I Am John Gabbana Documentary Premiere Tickets, Fri, Aug 12, 2022 at 7:00 PM | Eventbrite).

To learn more about John Gabbana’s story, visit his social media @sirgabbana, and by following the John Gabbana official Youtube page.  All media inquiries should be directed to: Sarah@epimediagroup.com.