When Amira Unplugged stepped on the stage of MTV’s Becoming A Pop Star, judges and fans alike knew that they were witnessing not just an artist with mere talent, but an artist with a vision for music that was greater than a performance. From her original spoken word poem Anxiety Eviction to her electrifying live performances, it was clear that her music and lyrics were touching listeners in an impactful way.

“I learned so much about my resiliency while competing on this show. I had a lot of tough moments that people don’t see on television. There were days when I wasn’t feeling my best and I still needed to be as creative as possible. But through it all, this dream to make an impact on the world through my music pushed me to be the best version of myself. I am so grateful for the chance to tap into that power,” Amira Unplugged says.

As the video for her song ATL Fight Song played, the rising star opened up with high energy and soulful harmonies that glided perfectly upon the pop, hip hop track. Clothed in a red hijab, a black edgy leather jacket, and white cat eye glasses Amira gave fans the high-speed vocal dexterity that she consistently delivers – time after time.

She gave it her all, her love, and her passion as she boldly declared her love for the south “404 you cannot resist/ when I’m done you’re really gone wish/ you served me with a cease and desist,” she rapped.

But she didn’t finish the song before doing what she does best, inspiring her listeners with her powerful, unifying lyrics “Be true to yourself, I know you’re gone shine.” It was her upbringing as a deaf African-American Muslim woman that empowered the rapper-singer to use her music to heal the world.

The singer-rapper sat down with Sheen to discuss competing on MTV’s new musical competition Becoming a Pop Star, pursuing a career in music despite having a hearing impairment, and much more. 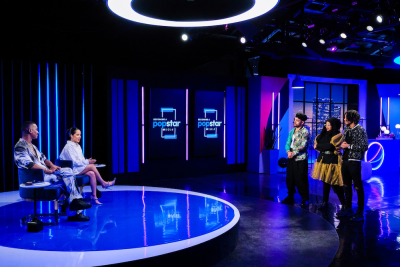 Tell us about your road to being cast on MTV’s Becoming a Pop Star.

Oh my goodness, I remember the day I was asked to start the audition process for the show. I was sitting in my room writing and preparing to film a TikTok video for a new original song, and then I got a DM from an amazing person named Ian Conner. He said he was searching TikTok for independent artists with strong content, numbers, and engagement who were finding success on the app for the chance to be on a MTV and Pepsi competition series. I was so stunned because that same day, I had been talking to my parents about wanting to reach a wider audience. He told me there were thousands of applicants and that only a few would be selected, but that he believed I had a chance, so I went for it!

Being cast on Becoming A Popstar was such a unique process because it is unlike any other show that is currently on television. I’ve never seen another program where competitors are asked to create original songs and high-quality music videos in less than a week for every episode! Because of this, the casting process took almost three months. I had to submit original song samples, film videos, talk about my dreams and why it mattered for me to be on the show, and showcase my original style. You name it, I spoke about. But it didn’t surprise me though. If you really think about it, to find the eight of us who competed, they had to sift through thousands of talented independent artists who could sing/rap, perform live and on camera, write original music quickly, and who had something unique to say with their music. I think that’s why it was so important for this to be affiliated with TikTok because that’s where independent artists from diverse backgrounds like me, who are really finding the space to be themselves and show who they are without having all of the resources yet. I feel so blessed to have been selected as one of the eight in the end. It was a long but worthwhile process. 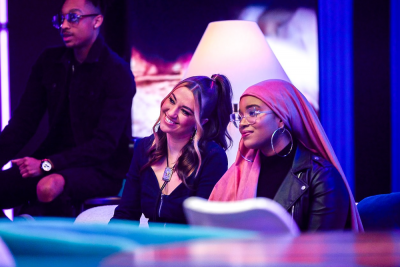 How are you able to pursue your dreams of becoming a singer with a hearing impairment?

As a hearing-impaired singer, I’ve had to find ways to turn my disability into a superpower. Growing up, one thing I noticed is that the more texture and pitch changes there were in a song, the more I connected with it. After deeply connecting with more members of the deaf community through social media, I realized that this wasn’t a unique experience. (D)eaf people often enjoy songs through rhythm and texture rather than the sound, making music more of a full-body experience. In every song, I try to incorporate interesting textures, bass drops, and changes that can be felt as well as heard.

When I began recording music every week for Becoming A Pop Star, I faced challenges in really hearing myself fully in the booth, so I had to get creative. I started asking producers to turn my bass and track up in the left ear (my deaf ear), and my vocal up in the right ear. This allowed me to not only record more smoothly but to make sure my songs accomplished what I wanted them to for people at all hearing ability levels. In my dance challenge song “I Will Run”, I even was able to work with my choreographer to incorporate American Sign Language at the end of the piece. I received so many messages of excitement after that episode aired. It means so much to me to know that I can make a difference in music for a community that is often ignored by the industry.

Where do you see yourself in the next 3 years?

I have huge dreams for the next few years. I want to release my debut singles, and my freshman E.P./Album fairly soon. I want to create a project that tells a unique story in a way that hasn’t been seen before. I have a clear vision and I want to build a team that all dream as big as I do. I hope to have a publishing deal with one of my wishlist labels, to perform at Global Citizens Fest, and to have opportunities to see the beautiful people of this world, while doing what I love. I want to collaborate with artists across the globe, from Burna Boy and Ayra Starr in Nigeria to Sigrid and Aurora in Europe, right back to Erykah Badu here in the U.S. Ultimately, as a genre-less/ genre-bending artist, I want to show the world that there are a lot of ways to touch people and to share your story, you just have to get creative and be open to others.

AmiraUnplugged is a genre-bending artist hailing from several underrepresented communities. Her upbringing as a (d)eaf African American Muslim woman in the South caused her to aspire to make music that unifies. By crossing genre lines with universal themes of triumph, darkness, and hope, Amira aims to bring vastly different people together through common themes. Her hearing impairment also informs a great deal of her music, causing her to add unique textural elements to her original work. She is currently a contestant on “Becoming A Popstar”, a new show on MTV where she is writing original songs and filming professional music videos that showcase her genre- bending style.