When it comes to the West Coast, no one deserves more flowers than the 4 GOATs in Mount Westmore. Composed of Ice Cube, Snoop Dogg, E-40, and Too Short, the supergroup is the pure definition of hip-hop royalty, having conquered the rap game for over 3 decades and counting.

Sheen had the pleasure of attending the super exclusive junket with Ice Cube, Too Short, and E-40, as they previewed 5 new songs that will be available to fans when their new album, Snoop, Cube, 40, $hort, releases on December 9th. Snoop was not present because he was busy shooting a movie.

Ice Cube kicked off the festivities, describing the record as “just legendary. He explains, “Good music. Fun music. I just think it’s a great project. These five will be a sample and I can’t wait til you guys hear more, see more.”

Cube went on to say that he’s been a part of multiple well-respected groups throughout his career, including N.W.A. and Westside Connection.

Speaking on Mount Westmore specifically, Cube states, “This is a great thing for hip-hop in general, to show that after 30, 40, 50 years in the game, we all can still get together and form a group. Do multiple albums together. It’s good for hip-hop. Outside of just being huge for the West Coast, it’s huge for every coast. If you can picture Mount Eastmore and Mount Southmore, you can picture what can be done in the future with major artists when they get together and do something like this.”

The first song they previewed is “Too Big” featuring the Bay Area’s own P-Lo, which is available now on all streaming platforms. Another song is “Up Down” for all the women having a hard time putting their jeans on, as Ice Cube gave the disclaimer “I don’t think E-40 has ever done a bad hook in his life.” 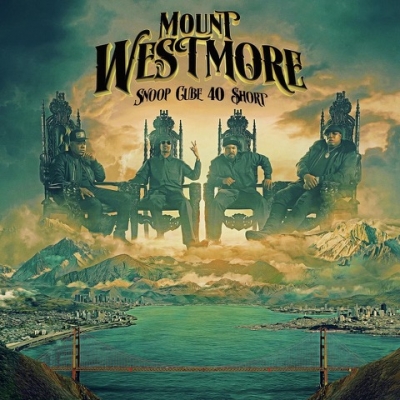 Fans can look forward to hearing the project in full top of December.