The tour kicked off on March 19 in Santa Cruz. It has been going up and down the West Coast and has already played sold-out shows in Seattle and San Francisco. The tour then will work its way east and wrap up April 23 in Atlanta, playing an already sold-out show at the Tabernacle.

Latto, a rising rapper also from Atlanta, has been making music professionally since age 10. She won the Rap Game Season 1 and drew plenty of attention for her EP “Big Latto” featuring the hit “Bitch From Da Souf” which has had more than 2 million streams on Spotify and Apple. She’s the first solo rapper from Atlanta to have a song certified Platinum. J Young MDK was one of the special guests invited to come along, along with Saucy Santana and Kali. 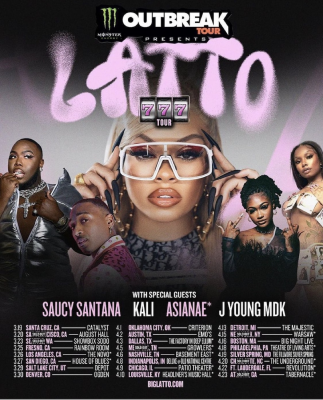 We caught up to the multi-talented rapper, singer, songwriter, and actor who has been going full speed since winning a radio freestyle competition as a teen. “ This tour is lit, the energy, the fans, it’s a whole vibe”.

J Young MDK has released four albums, starting with “Now or Never” in 2019, which received more than 100,000 streams in its first week. He also made musical history in 2020 by releasing two full-length albums in one day, “Aqua,” which showed his R&B skills, and “Black” which showed his rap side. Later that year he released “White” which let listeners hear his alternative video. He also released one new track each week from “Aqua” and “Black” as part of the #50Songs50Weeks campaign. In a couple of weeks, look for “Slow Motion,” a new single. 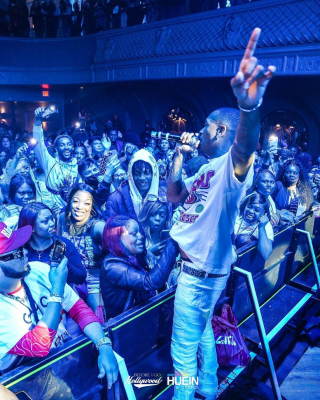 Along with accomplishing great things in the studio, sometimes with collaboration from producer and friend Jamie Foxx, J Young has also starred in a variety of TV shows and movies, everything from “Juwanna Man 2” and Apple’s “Feds Did a Sweep.” Though COVID rules limited some shows in the last few years, he’s continued to perform around the country, including performances in L.A., Phoenix, Miami, and the Atlanta Coliseum.

Tickets to the remaining shows in the 777 Monster Energy Outbreak Tour can be found through Live Nation or by visiting outbreakpresents.com/

To learn more about J Young MDK, follow him on social media @jyoungmdk. His music can also be found on most streaming services.