Hop in and take a spot in the jeep, J Young MDK and Jamie Foxx are taking you for the ride of your life! “Day Shift”, Netflix’s #1 hit is a combination of comedy and thrilling action. Foxx immerses himself in the role of a pool cleaner and vampire hunter all during the day. J Young MDK made a song that was fitting for the soundtrack titled “Bud (Mowing Down Vamps)”. Dave Franco, Jamie Foxx, and Sam Harmonix came together to create an epic music video that invites the audience to take on the San Fernando Valley with them. 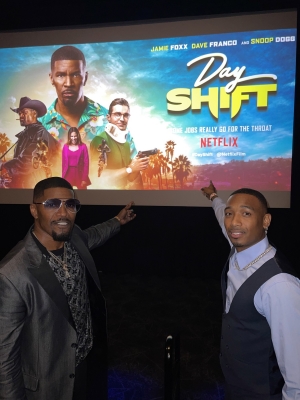 Followers may have seen J Young MDK on screen as he is no stranger to the tube. He was recently nominated for Outstanding Actor in a Short Film, “Mixed Girl” by Micheaux Film Festival. In the movie, he stars as a young man who comes to discover he is a father to a teen girl. He setups and takes on the responsibility and the movie follows the transition. J Young MDK also had features in the movies “Feds Did A Sweep” and Netflix “The App That Stole Christmas”, along with a slew of other movies and commercials. He notably attended the openings of “Day Shift” in both Los Angeles and Atlanta.

J Young MDK will always be first and foremost an outstanding rapper and entertainer. He is known for his music including his recent single, “Slow Motion”. More recently, he embarked on a cross-country tour with Latto on her tour “Monster Outbreak Presents: Latto 777 Tour”. During this he was a headliner, interacting with the crowd and getting them hype as he usually does at every single show.

This new song “Bud (Mowing Down Vamps) is no exception to the hype train. He has recently joined a group formed by Foxx called the BSB Boys. Brown Sugar Bourbon Boys, named after Jamie Foxx’s signature whiskey, is gearing up to set loose the hottest tracks of the year. Check out “Day Shift” on Netflix, download “Bud” ( Mowing Down Vamps) on all digital music streaming platforms, and stay updated on J Young MDK on Instagram at @jyoungmdk