Just because one is born a girl, doesn’t mean she will automatically know how to become a woman. The raising up of a little girl into a productive, respectable woman is, initially, placed in the hands of the first person she will ever know –– every child’s first teacher her mother. Oftentimes, a mother will raise her daughter to be all the things society says a woman should be and, from the raising up, will come a woman ready to be revered and celebrated by the world.

These daughters are the lucky ones.

But, oftentimes, mothers fail their children in those formative years and teach their daughters all the wrong things, sending them into a lifelong tailspin –– lives destined for disaster. But, let us not forget that, just because a woman manages to become pregnant and gives birth to a child, this in no way means she will know how to be a mother. Also, let us be reminded that mothers are daughters, too, and many have had their formative years thwarted by misguidance and bad examples.

Here within lies the cycle.

As we observe and process the current state of Black Mental Health, we take notice of the painfully obvious similarities we all share through trauma and we ask, how exactly did  we get here? Through my own bouts with mental illness, I was forced to unravel the generational thread that connected me, to not only my pain, but also my illness. The passage of trauma within my family has been handed-down from one generation to the next, curating a lineage of women within the brokenness of our past.

From one hurt daughter, birthed another, continuing a legacy that stretches hundreds of years into slavery.  The women and mothers who birthed this country, did so through the lens of survival, jading the way we love, feel and think. Ultimately, building a shaky foundation that has been expected to carry us even still today.

My journey through self-discovery has given me the opportunity to seal the cracks of the broken spirit of the women who’ve come before me, giving me strength to decode the generational curse within my family. Through healing, I was able to pen the first of three memoirs entitled Metamorph-A-Sis:The transforming of A Daughter, which details my life as a Black woman living with bipolar 1 disorder and how it not only affected my life, but also my relationships and career as well. Metamorph-A-Sis takes an in-depth look into mental illness within the Black community, outlining the symptoms and trauma associated stigma and the heavy burden of generational trauma.

Known for my work with some of the biggest names in sports and entertainment, my story of transformation begins with pain and ends in healing. From being sexually assaulted at the age of six to being diagnosed with bipolar 1 disorder at the age of seventeen, I ran away from not only my strained relationship with mother but also the stigma associated with my illness. The fleeing of my family’s generational incubation of pain would land me into the arms of a noted Miami Dolphins running-back, who would ultimately attempt to take my life, furthering the depths of my illness. Throughout the course of my denial, my behavior grew more dangerous and more erratic, almost becoming grave. The access of my career would offer me the plight of many life-altering and traumatic relationships, some of them involving sought-after names within the sports and entertainment industry, further cascading my pain. The haunting of my trauma and dissent of reality,  would send me down a decade-long tailspin of mental and emotional ups-and-down’s that would lead me to nearly taking my life.

Metamorph-A-Sis:The Transforming of a Daughter was curated as a learning tool to bring normality to a conversation that would change the world. This three-part-series was designed to pinpoint, symptoms, behaviors, and to highlight the cause-and-effect of Adverse Childhood Experiences (ACE’s) and how they mold and incubate foundations for mental illness to thrive. This first installment dives into my childhood trauma and how it structured the very basis of my life, highlighting bringing awareness to the harmful behaviors associated with not only bipolar disorder but also anxiety, depression and other mental health disorders. Installed within the book are concrete facts and alarming statistics surrounding the mental state of the Black community and what we can do to make an impacting difference. Equipped within the the back of this book you will also discover a carefully crafted Mental Health Workbook which cultivates and promotes health positive habits.

To get your copy of Metamorph-A-Sis: The Transforming of a Daughter please visit Amazon.

For more information on how you can end the stigma, please click here!

This feature was submitted by Lex Haley 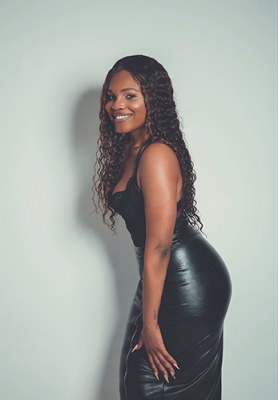 Celebrity publicist and mental health activist Lex Haley is changing the way we handle and address mental health amongst black women with her new memoir Metamorph-A-Sis:The Transforming of a Daughter . Known for her work within the entertainment industry, Haley denied the reality of her family’s trauma and mental illness, affecting her life, relationship and career. Her journey of transformation and healing has allowed her the opportunity to not only share her story but to also encourage and lift the voices of women that look just like her.

All image by Aulean ; BPL Productions