With over 29 thousand views on YouTube, rising Hop Hop artist Swizzi is proving that he is in demand and appealing to the multitudes. From his stylish dreads to his new generation, rebellious skaters style to his unique approach to rapping, the Los Angeles-based independent rapper is making an impact in more ways than one.

Swizzi recently released the 3rd visual of 2022 for his latest single “Swerve” and the music video features an eight hundred and fifty thousand dollar custom-built Lamroghini SBJ and a BMW. As a symbol of competition, both cars represent driving in the fast lane first class while being in control. It’s a reminder that you can move really fast and beat other cars but still have control.

In the flashy visual of his video, the rapper stands in his own ora. Radiating light and hype, the rapper tells Sheen “It represents my energy. It shows the chemistry of my emotions. It’s the feeling like life is moving fast, like I need to watch my surroundings and get a grasp of everything and to remain who you are. And don’t let all of the goofiness and colorfulness go away because of the money and fame.”

“My life is moving fast and I came from nothing but I’m in first place now. The swerve is an analogy of me driving in traffic, driving through lanes, and switching. When I say, “I need all 10 like poppin’ percs” it means that I need mine, I need all 10, tens down – being grounded, down to earth. I need to stay all 10 toes down. A perc 10 is like a drug but for me, it’s about staying humble to who I am. I’m not changing for anything. I’m staying humble no matter what changes in my life,” he adds. 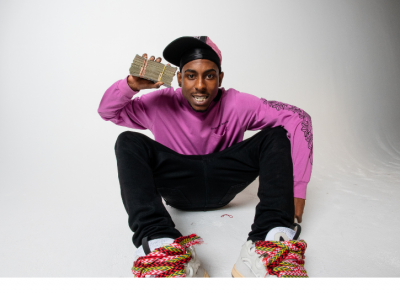 For the Detroit-born rapper, his vision is bigger than just music. It’s about impacting future generations to have not only opportunities but the knowledge and skills to achieve their biggest goals as well. As a bonafide leader in the new wave of Hip Hop, he is a businessman, independent talent, and owner of his own video production company.

“Being born and raised in Michigan shaped me as an artist by showing that if I just do what everyone else does, I’ll end up with a normal life just like everyone else. That’s not for me,” he says.

With the tending wave of rage-style beats, Swizzy’s latest release is set to light up the clubs around the globe. In the visuals for his latest music video, the stylish rapper sit’s proudly in his Lamborghini surrounded by fire. It’s a reminder that he is lighting up the music platforms as fans stream and view music on various social media platforms.

One fan took to IG and wrote, “It’s so much energy in these songs Twiss you’re really evolving,” while another fan wrote, “Visuals hard as hell.” Over 19 thousand followers on IG showed Swizzi love with fire emojis to celebrate the independent rapper’s journey – hit after hit.

“Swerve, swerve/ What’s the word/ I need all 10 like poppin’ percs/ Came straight up from the bottom shoveling dirt/ We not racing/ This a marathon but I’m still first”, he sings in the song’s hook.

Inspired by his desire to stay humble, Swizzi tells Sheen “It’s a song about staying in your lane until it’s your time but knowing your full potential.”

Swizzi recently sat down with Sheen to discuss his latest release “Swerve,” taking the step of faith from Michigan to California, and much more.

Your move to LA has been described as an act of faith. What is your definition of faith?

My definition of faith is believing in yourself or something. Not every risk or fear can be calculated and understood.

How afraid were you to step out and reach your musical goals? How were you able to overcome the difficulties?

Manifestation! You must visualize yourself accomplishing your goals and overcoming your fears!

What was your lowest point like? How did you stay determined?

Going homeless in LA after living an elegant lifestyle. I wasn’t ready for what was in front of me, but some good ole’ 2Pac “Better Dayz” helped me out!