The Queen of Pop, Madonna, and Nile Rodgers (producer of Like A Virgin) hosted a rollerskating party, Wednesday, August 10th, at The DiscOasis, in Central Park, New York.  The celebration was for the “Finally Enough Love: 50 Number Ones”, a fifty-song remix album that features Justin Timberlake, Britney Spears, Nicki Minaj, Maluma, and more.  The compilation was personally curated by the Queen herself, the only artist to ever reach the Billboard Dance Charts fifty times.  “Finally Enough Love: #1’s Remix” has 16 downloadable songs that are available now. 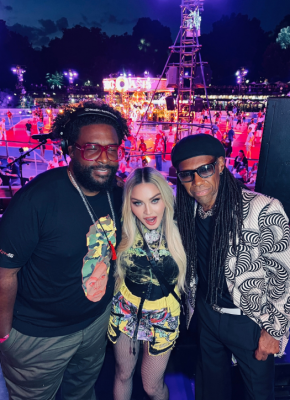 QuestLove DJ’d the skating event, spinning Madonna’s music exclusively, including her new collaboration with Beyonce “Break My Soul: Queens Remix”.  Partygoers were treated to Madonna-themed drink specials by Belvedere Vodka and Perrier Cocktails, like the “Queen Spritz” and the “Material Gworllll”.  Sherrie Shepherd (host on The View and The Wendy Williams Show), Cristian Siriano, Ariana Debose, DJ Lezark of the Misshapes, along with Madonna’s closest friends and family were there to support the forever youthful icon.  Her 16-year-old son, David Banda, captured everyone’s attention, along with his twin ten-year-old siblings, Esteres and Stella.  Mercy James, Madonna’s sixteen-year-old daughter was also in attendance. 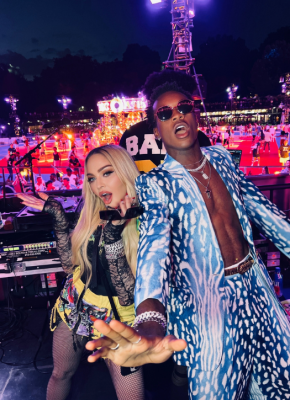 50 NUMBER ONES spans her entire dance club chart reign with dozens of remixes by the world’s top producers. In addition to fan favorites, the collection also includes a selection of rare remix recordings, with more than 20 being officially released for the first time or making their commercial/digital debut. The collection will be available digitally on August 19, along with a 3-CD version. A limited-edition, 6-LP version on red and black vinyl will also be available and has already sold out in pre-orders. The 16-track edition, FINALLY ENOUGH LOVE, will be available in physical format on August 19.